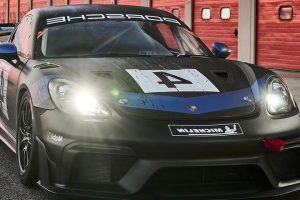 Earlier this month, Porsche unveiled its hardest iteration of the 718 Cayman thus far — the GT4 RS — and now it takes the car one step further by introducing the new Clubsport model.

To give it its full name, the Porsche 718 Cayman GT4 RS Clubsport is the German marque’s answer to conquering the track. If you thought that the road-going version was capable of doing just that, you’re not wrong, it’s just that the Clubsport has been specifically revised for track-only use.

As a result, the 911 GT3 Cup car-sourced four-liter flat-six mid-mounted engine produces 500 PS and sends that power to the rear wheels via a seven-speed PDK automatic transmission, which has shorter gear ratios than the previous Clubsport model and also the road-going car for a truly rapid driving experience.

Porsche explains that much work has gone into reworking the car’s underpinnings, saying, “The damper technology has been revised from the ground up in order to achieve an optimized vehicle responsiveness and a further improvement in body control. This has had a significant impact on the overall performance of the vehicle and handling. Upgrades include the use of two-way adjustable shock absorbers with improved characteristics, in addition to adjustable sword-type anti-roll bars front and rear.”

In short, the Clubsport will now take on corners much harder and faster than the road-going version, while the adjustable ride height, camber, and toe only further enhance the car’s dynamics. Naturally, the car is fitted with a rollcage and six-point harnesses, as well as a race-spec fuel tank that can hold 115 liters, and two sets of exhausts so that the car can comply with different track regulations.

Ready to race now, the Porsche 718 Cayman GT4 RS Clubsport can be seen above while more information can be found on Porsche’s website.

In other news, a tuner has turned the Mercedes-Benz X 350d into a six-wheeler.
Source: Read Full Article