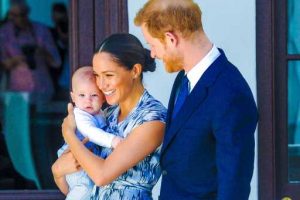 For the past year, the royal family has been on the outs with Prince Harry and Meghan Markle — particularly Prince William. The brothers’ feud has been going on for a while and though it’s no fault of Markle for entering Prince Harry’s life; her arrival has created a shift between the two that seems, to some extent, irreparable. Though things had been looking up for their relationship with Prince Harry and Prince William reuniting to investigate Diana’s 1995 Panorama interview, the brother’s feud might be reignited soon — and it’s because of the Duke and Duchess of Sussex’s newly launched Archewell website.

Prince Harry and Meghan Markle ended 2020 by unveiling the full website for their non-profit foundation that emphasizes and calls for “compassion”. The Archewell website’s homepage features two heartwarming photos of Prince Harry sitting on Princess Diana’s shoulders and Meghan snuggled in her mother Doria Ragland’s arms. The photos are displayed alongside the couple’s “Letter for 2021″ which reads, “I am my mother’s son. And I am our son’s mother. Together we bring you Archewell.”

The inclusion of Princess Diana’s photo has some worried that Princess Diana’s sons might begin arguing once more. Royal expert Phil Dampier spoke to the Daily Mail and stated that he believes Prince William will be concerned about how his brother uses Princess Diana’s image. “I think William will be slightly worried if Harry uses Diana for any of his charitable or commercial ventures without consulting him, and I don’t think he would be happy if Harry appears to be exploiting his mother’s iconic status,” Dampier told the outlet.

However, the mention of their mother is not the only cause for William’s possible disapproval but their unmentioned father Prince Charles. Dampier added, “It’s also very significant that Harry called himself his ‘mother’s son’ but has made no mention of Prince Charles. William is very much following now in his father’s footsteps with his environmental and conservation work.”

However, the reason for Prince Harry not including his father on the site might have been deliberate and instead focused on his mother as Meghan is estranged from her father Thomas Markle. “I suspect that part of the reason for the emphasis on mothers is that Meghan is so close to her mother and of course is estranged from her father, so perhaps Harry is thinking of her when he concentrates only on Diana,” Dampier continued.

As for how the brothers’ are currently getting along Dampier told the publication, “From what I am told the rift is not a lot better at the moment – they are not talking a lot.”

Here’s to hoping the brothers will be able to bury the hatchet this year.