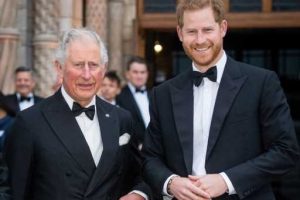 If Prince Harry and Meghan Markle were on the outs with members of the royal family before the premiere of their Netflix docuseries Harry & Meghan, the six-episode series surely had an impact on where they stand now. There’s been a lot of speculation and plenty of reports regarding how prominent members of the House of Windsor feel after the series’ debut. But a new report seems to suggest that King Charles III’s relationship with his youngest son could improve, despite ongoing tension.

According to royal reporter Rebecca English, there will always be a chance for reconciliation between the father-son pair. While English said most members of the royal family have made a “conscious decision, all of them together, to not respond, to not get bogged down” by all the accusations levied in Harry & Meghan, King Charles is choosing to let an olive branch stand between him and Harry. King Charles will “always keep the door open” for Harry, English said, via the Daily Mail.

Despite all the drama that’s dominated the narrative concerning Prince Harry’s relationship with his family across the pond, we’d still like to think there will always be a chance, even if it’s small, that he’ll be able to mend any broken bonds. The Duke of Sussex made it clear in Harry & Meghan that his relationships with certain members of his family have become more complicated. But even after everything he revealed alongside his wife, the fact that King Charles will “always keep the door open” for his son is a promising update.

Of course, we don’t know if that door will be open for Harry’s wife, Meghan Markle. There’s also the question of whether it’s insinuated that Harry be the one to reach out as opposed to his father. With Harry’s memoir, Spare, on the way next month, this likely won’t be the last update we get on where Harry and his father’s relationship reportedly stands.

Click here to see a complete timeline of Prince Harry and Meghan Markle’s feud with the royal family.