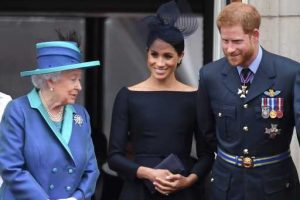 When news broke that Prince Harry and Meghan Markle will indeed attend Queen Elizabeth II’s Platinum Jubilee celebrations next month, speculation began to arise as to what their participation in the festivities would look like. We already know the Duke and Duchess of Sussex are making the trip family-oriented by bringing along son Archie, 3, and daughter Lilibet, 11 months. But we also know the couple won’t appear on Buckingham Palace’s balcony with the royal family — and further explanation for that decision and more is now coming to light.

The royal family’s balcony appearance during Trooping the Colour has long been a staple of such royal family celebrations. For the Platinum Jubilee, only working members of the royal family will appear on the balcony, and while that might seem like a way to keep Harry and Meghan out of the spotlight, one royal insider believes the Duke and Duchess of Sussex actually encouraged the idea. According to a Yahoo News piece written by royal biographer Omid Scobie, Harry had “spoken with his grandmother about the possibility of not attending Trooping the Colour long before” a final decision was announced, per The Sun.

As Scobie further explained, the couple was not “cut” from the balcony appearance. Instead, Harry and Meghan felt it would be “inappropriate” for them to be there, as they’re no longer working royals and they want to keep the focus on the queen. Another report from The Daily Express seems to reiterate Scobie’s reporting. Royally Us podcast co-host Christine Ross also noted how Harry and Meghan “won’t be seen much” during the Platinum Jubilee festivities.

“Meghan and Harry will be there for the celebrations,” Ross shared, per The Daily Express. “I think that they will mostly take part in private celebrations. I don’t think we’re going to see them very much, to be honest. But they’re there, they’re part of the family, but they’re not taking away from the story.”

Indeed, Harry and Meghan are well aware the type of media coverage that could eclipse such a historic moment for Queen Elizabeth II. The pair already paid a visit to the queen, where Harry and Meghan were able to reconnect with Harry’s beloved grandmother and potentially discuss those Platinum Jubilee celebration arrangements. For such an historic occasion as Queen Elizabeth II’s Platinum Jubilee, it makes complete sense for Harry and Meghan to want to take a number of steps back to keep the focus on the long-reigning sovereign, while still having the opportunity to reconnect with members of the royal family and introduce Archie and Lilibet to everyone, too.

The Palace Papers: Inside the House of Windsor — the Truth and the Turmoil by Tina Brown

Even as casual British royal family observers, there’s still so much we don’t know about what happens in the House of Windsor. 2022 is poised to be a memorable year for the royal family. But with historic highs come lows and pitfalls. Royal biographer Tina Brown takes readers from the troubling years following Princess Diana’s death, to the rift between Princes William and Harry, the scandals of Prince Andrew, and Queen Elizabeth’s steady resolve through it all in The Palace Papers: Inside the House of Windsor — the Truth and the Turmoil. Brown’s book features new, intimate details about the royal family, and contemplates how the House of Windsor moves into a new era.

'The Palace Papers: Inside the House of Windsor — the Truth and the Turmoil' by Tina Brown