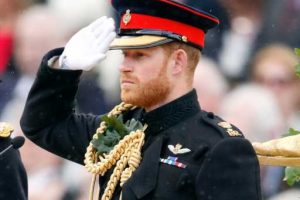 While the rest of the men in the royal family will proudly wear their military uniforms to Queen Elizabeth‘s funeral and vigil on September 19, Prince Harry will not be allowed to do the same, despite his status as a war veteran with active service experience in Afghanistan and a decade spent in the British army.

Royal expert Omid Scobie reported earlier today that “only working members of Royal Family will wear military uniform” to events honoring the Queen this coming week, a distinction that counts out both Prince Andrew and Prince Harry. However, Scobie has further learned that Andrew will be granted an exception as “a special mark of respect” to wear his military uniform to her actual funeral, but that Harry will not be granted that same exception.

When Prince Harry and Meghan Markle made the decision to step down as working members of the royal family, Queen Elizabeth stripped him of his military titles: Captain General of the Royal Marines, Honorary Air Commandant of RAF Honington, and Commodore-in-Chief Small Ships and Diving. These titles were “returned” to the Queen to be “redistributed” to other working members of the family.

Meanwhile, Andrew was stripped of his military titles back in 2019. If you need a refresher on the disgraced prince, he was a close friend of Jeffrey Epstein’s, was accused of raping a 17-year-old girl, subsequently paid out millions of dollars to his victim in a sex abuse lawsuit, and was forced to step down from his public role in the royal family as a consequence.

Sources have confirmed that the same uniform exception will not be extended to Prince Harry, which is quite a statement from the royal family. We’re not really understanding why a war hero and loving grandson, who earlier today referred to his grandmother as his Commander-in-Chief, can’t be granted the same privileges as Andrew — but the royal family has always baffled us on that particular front.