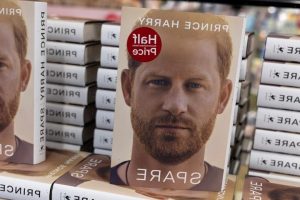 Prince Harry’s memoir “Spare” has just become the fastest-selling non-fiction book of all time, selling over 400,000 copies since its release on January 10, 2023.

Prince Harry has been everywhere as of late. Following his unruly Netflix docu-series and interviews touching on uneasy royal family secrets, the Duke of Sussex has now released his first-ever memoir.

Titled “Spare,” the autobiography has already broken numerous records, becoming the fastest-selling non-fiction book ever, according to Transworld Penguin Random Publishing House. Current sales have already surpassed 400,000 copies across hardcover, audiobook, and e-book downloads since its release on January 10, 2023.

The 407-page book sees Prince Harry express anger against the traditional British press, personal issues with the death of his mother, Princess Diana, his struggles with mental health, his relationship with his wife, Meghan Markle, and his ever-changing relationship with the royal family. Furthermore, the prince expresses irritation at being “spare to the heir” and his rocky bond with brother William, Prince of Wales.