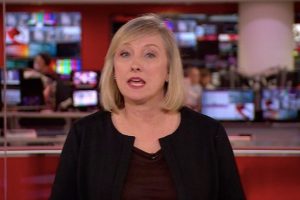 BBC newsreader Martin Croxall has been praised for the professional way she handled her delivery of the news that Prince Philip had died, despite being visibly emotional about it.

Croxall got choked up live on air, as she announced to the UK the death of the Duke.

“A short while ago, Buckingham Palace announced the death of His Royal Highness Prince Philip, The Duke of Edinburgh,” she said.

She paused for a few moments, fighting back tears, before proceeding to read the statement.

“BBC Television is broadcasting this special programme,” she added at the end.

Viewers noticed the broadcast journalist’s emotion coming through her words and praised her for keeping it together while being visibly upset.

“Martine Croxall did a tremendous job, only a moment before her necklace has caught around her mic and she explained it when the camera came back to her,” one person said on social media.

“Next thing she was reading out the breaking news, the catch in her voice betraying her upset as she read the words.”

“The presenter on the BBC is nearly crying, gosh this is shocking,” another person commented.

The newsreader had a last-minute change of outfit to announce Prince Philip’s death. She had been hosting the programme wearing a brown dress and a statement necklace. She briefly paused to remove the necklace and put on a black blazer, before announcing the sad news.

The change of outfit is part of BBC protocol when announcing the death of a royal. The black donned by the newsreader represents the mourning of the nation.

Croxall was not the only newsreader to get emotional while speaking about Prince Philip’s death.

On IT, newsreader Mary Nightingale’s voice quivered as she delivered the news.

“Good afternoon, if you have just joined us, we have broken into our regular programming to bring you a special programme following the death of the Duke of Edinburgh,” she said.

“Let me just repeat the statement which we have received in the past hour from Buckingham Palace.

“It is with deep sorrow that the Majesty The Queen announces the death of her beloved husband,” she added, before pausing as she got choked up.