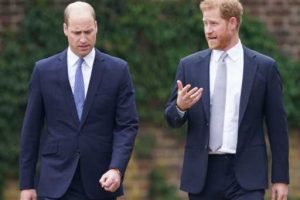 Prince Harry and Meghan Markle’s visit to the U.K. for Queen Elizabeth II’s Platinum Jubilee is just days away, and there is one family member who apparently has extended a major olive branch ahead of their arrival: Prince William. He reportedly thought it was best to thaw the frosty feud by reaching out to his younger brother ahead of their grandmother’s major milestone.

According to the Mirror, the brothers have not only been texting each other via the platform WhatsApp, but they have also been FaceTiming weekly and bringing their kids onto the video call. A source told the U.K. outlet, “The brothers needed time for everything to settle down. The family, including William, had been disappointed in the way Harry and Meghan chose to leave the royal family.” Now that the royals have a better perspective on the stateside couple’s life goals, they seem more open to mending fences, even if they don’t agree with them stepping down from their senior roles.

The kids have also been a big part of healing the wounds. “William sees that Meghan is a good mother and loyal wife and he is genuinely pleased for his brother,” added the source, who believes William and Harry are “very much back on their old buddy terms.” One notable absence from these calls is Meghan and Kate Middleton, who have refrained from participating, letting their husbands heal their wounds first. The insider remarked, “Meghan’s distance from Kate has also helped heal the friction between the two men,” so perhaps the visit with all of the cousins will slowly open doors for the two women to work on their relationship.

Harry and Meghan will not be the focal point of the Platinum Jubilee since they are no longer in working members of the palace, but their presence will still be felt. Of course, the press will be covering every moment, but most importantly, it’s wonderful that the family found a way to make the lifetime event as peaceful as possible for Queen Elizabeth.