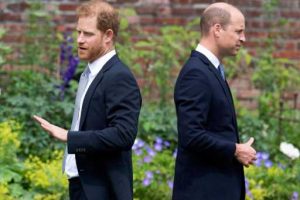 With the feud between Prince William and Prince Harry seemingly widening in the weeks after Queen Elizabeth II’s Platinum Jubilee, royal insiders are starting to speculate what can be done to either temper the situation or bring the brothers back together. Well, there is one royal expert who is going rogue from the rest of the U.K. press and criticizing the Duke of Cambridge for not stepping up to demonstrate his leadership skills as the future king.

Duncan Larcombe, the former royal editor for The Sun, got right down to the heart of the matter, telling The Daily Beast that William “has to start showing some leadership” when it comes to brokering peace with Harry. While many British outlets are quick to put all of the blame on the Duke of Sussex’s shoulders, Larcombe thinks the burden is on William in this situation. “William has got a lot more to lose than Harry,” he explained. “The monarchy could be lost on his watch.”

The royal insider broke it down in really simple terms: “If William wants to be a future king, a great leader giving inspiring addresses about the environment to two billion people, then the public are within their rights to expect him to be able to sort out a frankly pretty minor dispute with his brother.” That’s a point that we rarely hear — yes, the brothers are equally responsible for their behavior in the feud — but maybe it’s time for William to take on a bigger role and show why it’s important for them to have a warmer family relationship.

Larcombe suggested that the heir to the throne makes an effort “to pick up the phone” because “if he really does believe he is the chap chosen by god to be king, then he should be capable of sorting out this row with his brother.” It’s been reported that Kate Middleton was trying to broker peace between William and Harry, but it’s not her battle to wage. With both of the royals waiting for an apology, it’s time that someone rises to the occasion — let’s see if William will listen to that royal advice.

Brothers and Wives: Inside the Private Lives of William, Kate, Harry, and Meghan by Christopher Andersen

The fraught relationship between the Cambridges and the Sussexes has been heavily scrutinized for the past few years. But we’ve never had quite a clear look at the relationship between Prince Harry and Meghan Markle and Prince William and Kate Middleton, until now. Longtime royal writer Christopher Andersen takes fans into the intimate conversations and exchanges between these two powerful couples in Brothers & Wives: Inside the Private Lives of William, Kate, Harry, and Meghan
, illustrating what was lost, gained, and what might be found as the next generation of the royal family embraces the future.

Brothers & Wives: Inside the Private Lives of William, Kate, Harry, and Meghan