The rapper, who was stabbed in the neck with a broken bottle in a nightclub in 2009, also accused the government of “washing the blood from its hands” over the issue following a spate of stabbings in London.

He posted a long message on Instagram after appearing on Good Morning Britain, saying he had wanted to say more but did not have enough time on the show.

Statistics showing it is “largely black youths stabbing each other” are “only true of certain areas”, he said. 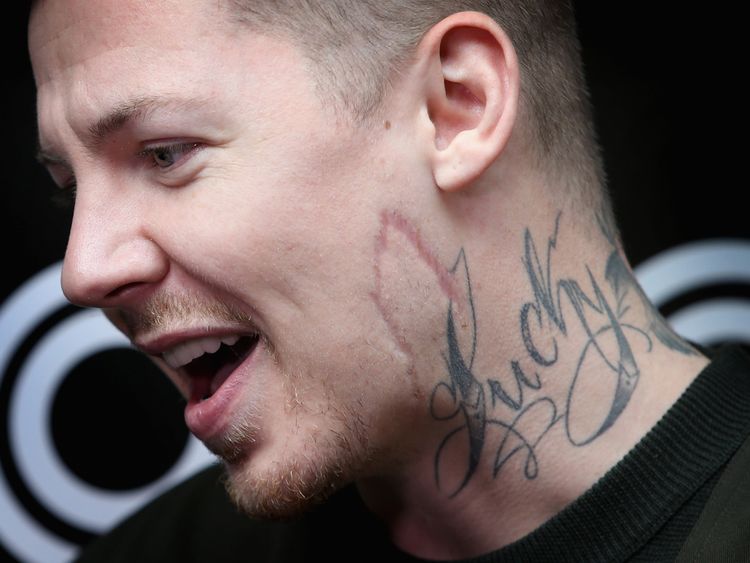 “There had been a lot of reference to a statistic that it’s largely black youths stabbing each other – what was left out was that this is only true of certain areas, as anyone with a brain can work out, in more densely white populated areas, the face of knife crime is white,” he said.

“That’s never represented in the media. The fact that the face of knife crime they project nationally is black youths, as I said this morning implies institutional racism and criminalises a whole race, fitting their agenda to bring back racially profiled stop and search.

“I don’t think stop and search works to do anything apart from cause more division, friction and lack of trust of an organisation ever proven to be growingly corrupt.”

The star, whose real name is Stephen Manderson, went on to say that the problem has been growing for years, with “many contributing factors”.

“I’d put poverty at the top of the list. There’s a science to social deprivation, to exclusion, expulsion, lack of paternal role models, lack of any role models, unequal education, unequal opportunity, cuts to all the services that might help people from going down the road to carrying a knife.”

He continued: “Stop and search isn’t going to be a quick fix. Children should never get to the point of carrying a knife – but society needs to move on a hell of a lot before that will happen.”

He finished his message by saying that knife crime is not just a problem for the people affected, but society as a whole.

“We need to start empowering people in their communities and giving them voices, doing everything we can to help underprivileged children and struggling families,” he continued.

“All of this happens while our government quite simply washes the blood from their hands. Let’s discuss.”

It comes after several stabbings in London in the past few weeks.

On 31 October, Rocky Djelal, 38, died after a daylight attack in Rotherhithe, southeast London. Fifteen-year-old Jay Hughes died in hospital after being attacked in Bellingham, southeast London, the following day.

John Ogunjobi, 16, was stabbed to death in Tulse Hill, south London, on 5 November.

Metropolitan Police Commander Stuart Cundy announced last week that hundreds of extra police officers would be deployed as a result of the attacks.