Visitors who arrived at the Whitney Museum of American Art on Friday night to view the works in this year’s politically tinged Biennial had to pass by a raucous demonstration that was not part of the official programming.

About 200 people squeezed into the Whitney’s lobby, in the ninth of a series of weekly gatherings to protest a museum board member whose company sells tear gas that activists and the art publication Hyperallergic said had been used on migrants at the Mexican border.

It was the most recent episode in a prolonged public debate — involving letters and pronouncements by museum employees and officials, scholars, artists and art critics — over the board member, Warren B. Kanders, and his company, Safariland.

According to Hyperallergic, photos showed tear gas canisters marked with the company’s name at a site where the American authorities used tear gas last fall to disperse hundreds of migrants running toward a crossing that leads from Tijuana to San Diego.

Protesters outside the museum and in the lobby on Friday night beat drums, blew horns, chanted and brandished signs like one that read “Warren Kanders Must Go.” Some made it to an upper floor, where a black banner was draped from the building, reading, “When We Breathe We Breathe Together.”

There was even a rolling installation that seemed custom made for the occasion, in the form of a five-foot-tall silver-colored cylinder on wheels replete with a wire pull ring and emblazoned with the words “tear gas.”

An organizer with the group Decolonize This Place, which called for the weekly protests, read from a message to the Whitney’s president, Adam Weinberg, and its board of trustees demanding they remove Mr. Kanders from the board.

“We could have shut the museum down today,” the organizer, Amin Husain, shouted in the lobby. “But after nine weeks of action we offer the museum leadership a window to do the right thing.” 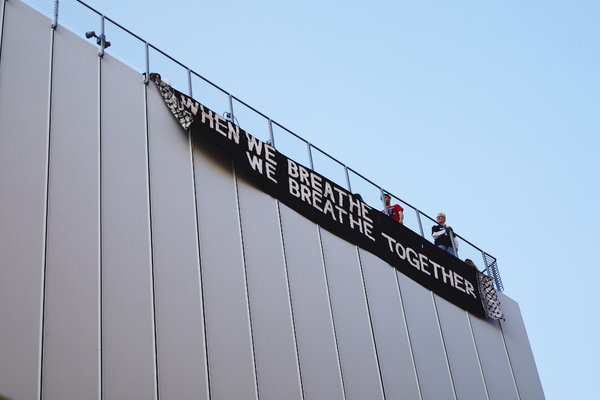 Ticket holders passed by, gazing quizzically. Some paused to listen or to accept copies of the message that Mr. Husain was reading from. One woman shook her head and waved a hand when offered a copy. Museum employees stood by and watched the protest, but did not try to stop it or to prevent anyone from entering the lobby.

Last year dozens of museum employees wrote a letter to express their “outrage” over reports that Safariland gas had been used at the border. Mr. Kanders then wrote a letter saying he took pride in the company. He added that Safariland made equipment, like body armor, that helped protect people and that it had no control over how its products were used.

In a letter, Mr. Weinberg said that he respected “the right to dissent.” But the Whitney, he added, is “first and foremost a museum” that “cannot right all the ills of an unjust world.”

Several art critics, academics and others followed with a letter calling for Mr. Kanders’s removal. Last month about two-thirds of the 75 artists and collectives chosen for the Biennial also signed the letter.

One of the Biennial participants, the London-based research agency Forensic Architecture, entered as its exhibition a 10-minute video called “Triple-Chaser” with Praxis Films, run by the filmmaker Laura Poitras, about a type of tear gas grenade manufactured by Safariland.

After about an hour in the museum lobby, the protesters filed out and began marching through the West Village, accompanied by a contingent of police officers.

The roving demonstration halted on a tree-lined block outside a red-brick townhouse that the protesters said belonged to Mr. Kanders. Outside the residence, the chants continued. “Your time is up,” one woman shouted. Another woman burned a bundle of sage near the home, as if to ritually cleanse the premises.

A man distributed fliers addressed to residents of the block “and everyone in New York City” that listed the address of the building said to belong to Mr. Kanders and contended that his company’s tear gas had been used on migrants at the Mexican border, on Palestinians in Gaza and on protesters in Baltimore and Ferguson, Mo.

As rain arrived, the ranks of the crowd thinned, and soon a final chant went up: “We’ll be back.”