Raising the Cultural Bar on Campuses

DURHAM, N.C. — When you think of Duke University, the image of its gothic-style chapel may come to mind, or perhaps Cameron Indoor Stadium, the raucous center of the Blue Devil basketball games. But tucked along Campus Drive here, amid the stately tall pine trees, the 65,000-square-foot Nasher Museum of Art has become a hub for students.

Across the country, university and college museums run the gamut from those featuring contemporary art and ancient relics mostly used as teaching tools to world-class collections tackling groundbreaking projects and traveling exhibitions.

While not typically top of mind as a go-to destination, college and university art museums have a common goal: to raise the bar for the academic and cultural life of a campus and its environs.

“The mission of the Nasher is to expose students at Duke to the highest quality of art and exhibitions and also to have them see what we do as part of their learning,” said Sarah Schroth, the museum’s director.

Following is a selection of college and university museums.

The Nasher highlights artists of African descent and female artists — those who have been historically underrepresented or omitted by art institutions. The namesake and founder of the museum, Raymond D. Nasher, a collector of modern and contemporary sculpture, graduated from Duke in 1943.

The museum opened in 2005 with an exhibition of works from Nasher’s collection. Today, it’s home to about 13,000 pieces of art. In addition to a handful of major exhibitions each year, the museum hosts a variety of performances by dancers, musicians and poets. The artists in the latest exhibition include Judy Baca, Luis Cruz Azaceta, Jorge de la Vega, Andy Warhol and Roy Lichtenstein. 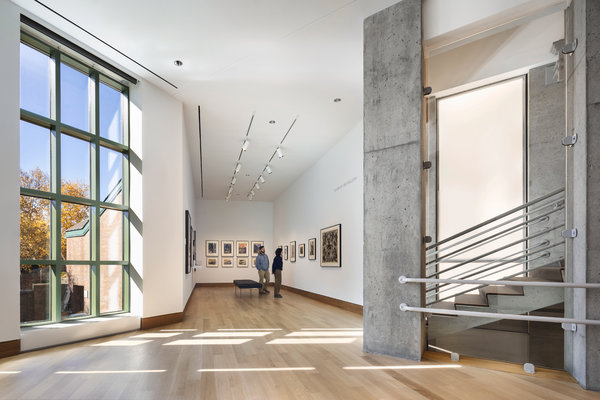 A $50 million renovation and expansion — adding three object-study rooms and six galleries — recently opened at the Hood Museum of Art after two years of construction. Students and visitors have access to its 65,000-object collection including works by Rembrandt, Francisco Goya, Mark Rothko, Yayoi Kusama, Georgia O’Keeffe, Frank Stella and Julie Mehretu, among others.

It’s acknowledged for its collection of nearly 7,000 objects in its Native American holdings, including archaeological materials, 19th-century beadwork and hundreds of contemporary items. A 2,400-object Melanesian collection features works from every major island in the region extending from the island of New Guinea in the southwestern Pacific Ocean to the Arafura Sea, and eastward to Fiji. It also features the Owen and Wagner Collection of Indigenous Australian Art.

The Zimmerli Museum’s Russian and Soviet nonconformist art holdings contain over 22,000 objects by more than 1,000 artists and provide an overview from the 14th century to the present. The media include carved stone icons, paintings on canvas and panel, sculpture, works on paper, photography, video, artists’ books, and other self-published underground texts, or samizdat.

There’s a notable collection of 19th-century lubki, simple folk prints of Russia. In addition to art made in Russia, the collection includes examples of nonconformist art produced in the Soviet republics from Armenia to Uzbekistan. It also features ancient to contemporary art including French art of the 19th century.

The current major show, “Becoming John Marin: Modernist at Work,” features works by one of the major figures of American modernism. There are also new portraits of a son of a former slave — Paul Robeson, a singer, actor and activist — by current artists, to celebrate the coming centennial of his graduation from Rutgers.

A collection of nearly 900 works by the figurative painter Alex Katz is a highlight at the college’s museum of art. It recently acquired three etchings by Rembrandt made in the mid-1600s, bringing its collection of prints by the Dutch master to a dozen. The print collection includes works by Picasso, Albrecht Dürer, Goya and James McNeill Whistler.

The museum, which was founded in 1959, comprises five wings, nearly 8,000 works, and more than 36,000 square feet of exhibition space. A current exhibition, “Theaster Gates: Facsimile Cabinet of Women Origin Stories,” includes nearly 3,000 images from the Johnson Publishing Company archive. Founded in 1942, Johnson Publishing recorded the lives of black Americans for more than 70 years through the magazines Ebony and Jet.

Founded in 1963, the Blanton Museum of Art is considered one of the largest university art museums in the country with collections of nearly 18,000 objects. A must-see here is Ellsworth Kelly’s 2,715-square-foot limestone and stained-glass chapel, “Austin,” with an 18-foot redwood totem that was logged in the 19th century in the interior. Mr. Kelly gave the design plans to the museum just before his death, and it was opened to the public last year.

While the Blanton features works by American and contemporary artists, including Joan Mitchell, Mark Rothko and Alice Baber, it has been at the vanguard among museums in collecting modern and contemporary Latin American art. It recently bolstered its holdings from the Spanish and Portuguese colonial era with an acquisition of 119 paintings, sculptures, furniture and silverwork collected by Roberta and Richard Huber.

This museum of art, known as UMMA, has a permanent collection of more than 20,000 artworks collected over 150 years and features big hitters like Helen Frankenthaler, Picasso, Monet and Warhol. The museum also hosts around 20 special exhibitions per year.

A current exhibition, “Art in the Age of the Internet, 1989 to Today,” explores how the internet culture has influenced visual art through more than 40 works across an array of media — painting, performance, photography, sculpture, video and web-based projects. A coming exhibition The Six Senses of Buddhism focuses on works from its collection associated with different types of Japanese Buddhism, engaging all of the six senses: sight, hearing, smell, touch, taste and mind.

The gallery experience incorporates the sound of chanting, the scent of incense, the feel of bronze, ceramic, and silk and the creation of mental images.

The Fowler Museum, which opened in 1963, has a strong accent on global arts and cultures highlighting works from Africa, Asia, the Pacific and the indigenous Americas. Its permanent collections total over 120,000 art and ethnographic and 600,000 archaeological objects, but it’s the museum’s African art collection that makes it standout as a leader in the exhibition and preservation of art from Africa.

A current exhibition, “Inheritance: Recent Video Art from Africa,” features video works by contemporary African artists who are contending with inherited political, social, and environmental realities in their respective countries — Zimbabwe, Nigeria, South Africa — and the costs of colonial legacies.

The Block Museum of Art on the Evanston, Ill., campus has four galleries to showcase exhibitions and a 150-seat auditorium. An evolving permanent collection of about 6,000 works focuses primarily on prints, photography and drawings. Recently, the museum partnered with Northwestern’s Program of African Studies on the exhibition “Caravans of Gold, Fragments in Time: Art, Culture, and Exchange Across Medieval Saharan Africa.”

Caravans of Gold is the first major exhibition addressing the scope of Saharan trade and the shared history of West Africa, the Middle East, North Africa, and Europe from the eighth to 16th centuries. Displaying more than 250 artworks, the exhibition features loans from partner institutions in Mali, Morocco, and Nigeria, many of which are being seen in North America for the first time.

This museum has collections of more than 100,000 objects. The works include Greek and Roman ceramics, marbles and bronzes, Roman mosaics, stained glass from medieval Europe and European paintings from the early Renaissance through the 19th century. The collection of 20th-century and contemporary art has an emphasis on undervalued artists of the late 20th and early 21st centuries. It is also noted for its collections of more than 27,000 photographs.

“Confronting Childhood” is a current exhibition spanning more than 150 years with glimpses of children and their families through paintings and primarily photography, including artists such as Diane Arbus, Ruth Bernhard and Lewis Carroll.

There are around 15,000 works of art in the holdings of the Williams College that spotlight work by African-American artists, work by women artists, and international contemporary art. A current intriguing exhibition is “possible selves: queer foto vernaculars,” which presents the global impact of queer identities on the evolution of portrait photography bringing together works from the museum’s collection alongside over 200 images from social media. Straddling two galleries and 60 years of photography.

The exhibition is the first “to link the voices and experiences of queer folk around the world to the evolution of an art genre,” said Horace D. Ballard, an assistant curator who organized the show. “In breaking down the barriers between snapshots, selfies and art, the exhibition equates queer portraiture with political action. My hope is that the audacity of the work inspires visitors to build more inclusive, equitable and inquisitive communities.”