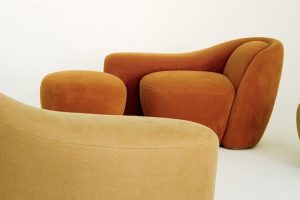 “This all started with a desire to look into the meaning of comfort,” says Paris-based designer Raphael Navot, while walking around the installation of his new pieces for Loro Piana Interiors. It’s a hot day in Milan, and the desert-like scenography is a welcome moment of calm away from the hustle and bustle of the city while also – and perhaps more importantly – providing a wealth of soft, squishy chairs to relax on. “We wanted to ask ourselves, what is comfort, and question how we relate to the sensorial aspect furniture”.

As such, Navot named his presentation “A Portrait of Comfort”, and with both the installation – created by the Loro Piana Interiors team – and the pieces he designed, he offered just that. Inside the brand’s Via Della Moscova headquarters, a series of undulating surfaces had been covered in a sand-coloured carpet. These lines were inspired by the forms of Navot’s furniture also on show, which was either placed on top of the dunes as if they were “watchful guardians of the landscape”, or tucked inside the “caves” beneath them.

Navot’s first piece in the collection was launched in 2021, and came in the form of the “Palm Duet Chaise Longue”. Its silhouette encompasses a large armrest, which can provide a perch for a second person, and its fabric upholstery is the “Cashfur” range by Loro Piana Interiors.

The same language was used across the new Palm objects, too – a sofa, méridienne, armchair, stools, a side and a coffee table and an ottoman. It was important for Navot that the pieces – or “beings” as he describes them – could work equally as successfully when placed alone, as they could when grouped together. The name reinforces the concept of the human touch, with “Palm” in reference to the hand opening up to bring someone to safety.

Navot recalled the period during which he began crafting his ideas with the Loro Piana team:

“We were designing during the pandemic, and I had a call with Francesco Pergamo – the director of Loro Piana Interiors – during which he said ‘you know what? We have time’. And just that, just those three words suddenly changed everything when it came to designing.”

“Having that time and space really affected the forms that we wanted to do, and enabled us to go deeply into the concept – asking where comfort comes from and how does it make you grateful?”

For many, there always seems to be a level of compromise when it comes to furniture – either it’s extremely comfortable but lacks appeal in its form, or it is beautiful to look at but impossible to relax on. But through his Palm pieces, Navot has endeavoured to create something that fulfils both aesthetic and ergonomic needs, simply by basing its form on the person who will use it. Simple perhaps, but an idea that appears effective, nonetheless.

“Your furniture needs to work for you physically, but it can also work for you in the sense of mentality too. Generally speaking, the thing that relaxes your body will also relax your mind,” he said.
Source: Read Full Article