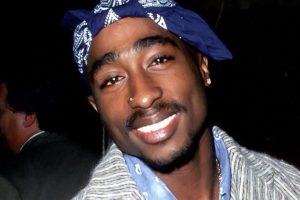 17 of the 18 NFTs will be original photos of Tupac Shakur, with the 18th being a “Super NFT” collage that features the other 17 photos. Each NFT will be offered with a framed print of the photo signed by Dotson and a part of the proceeds will be used to plant trees in Pac’s hometown of Marin County, California via 100K Trees for Humanity.

Dotson explained in a statement that he ended up at the 1992 release party shortly after meeting the late rapper at a bar. The hip-hop journalist and photographer was still on the rise at the time and was able to give Pac a copy of a magazine where he had written the cover story, and the rapper began to discuss an article about misogyny in hip-hop, noting that “the community had to come together to stop all the self-hatred they were inflicting on one another in the music.” Pac then invited Dotson to the release party:

“I bought a disposable, black and white 35mm camera from the Thrifty’s on the corner of La Brea and Rodeo. Later that night I got to Glam Slam, Prince’s old club on Boylston Street downtown and where the release party was held. I couldn’t wait to see this brotha perform. I loved the energy he put out on stage as a backup dancer for Digital Underground; the same with his performance in the video when he dropped the verse on Same Song. I knew that he was going to give it up that night for his debut release party. Surprisingly, there weren’t many people at the show: mostly industry execs and a few heads from the underground community. Now, I am happy that after hanging on to the negatives throughout the years, I have the opportunity to release them via an NFT. This technology is exciting for artists. ”

The photos from the disposable film camera were developed but Dotson never published them, and only showed them to his well-behaved students during his time as a substitute teacher. In addition to selling them as NFTs, he is also looking to “create a traveling exhibit of the collection” so the rest of the world can see.

“[W]hen you look at these photos you can see it in his eyes: the determination, the passion, the swagger, the shine,” Dotson told Rolling Stone. “These photos show a side of the man not many people got to see. This ‘Pac wasn’t covered in jewels and Versace; this ‘Pac was humble and hungry. He knew what he going for on stage that night, and that was to become the legend that he is.”

Take a look at the NFTs on OpenSea.