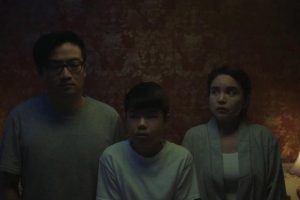 After dropping out of Toronto Metropolitan University two years ago to pursue his passion in film, Reangsei Phos wasted no time in getting work on creating stories in the medium. Inspired by the likes of Haruki Murakami and the Safdie Brothers, Phos’ courage for taking his leap of faith was spurred on by the recent representation of Asians in the industry ushered in by Crazy Rich Asians, Parasite, and The Farewell.

“I dropped out with no backup plan. My plan was to finish Talisman and I never thought too deep about what would happened if it didn’t work out. I feel like I put a lot of pressure on myself because I was constantly in the mindset of, this has to work, no matter what.”

Looking to tell a story that shared some of his childhood memories and the common superstitious tendencies found in Asian households, Phos created Talisman — a short film that combines those cultural experiences but with a tinge of horror. Entering the short into Seattle’s 2022 National Film Festival for Talented Youth (NFFTY), Talisman was awarded the Audience Choice Award. In a surprising turn of events, Phos took to TikTok to share his filmmaking journey as well as some behind-the-scenes footage of Talisman, to which it has now been viewer over 3.3 million times.

“Lately my views as a filmmaker has been shifting. Asian representation in film is important but recently I’ve been feeling like films with an Asian centric cast make a deal about being Asian, tapping into themes of culture and identity however it’s equally as important to show things other than the Asian experiences, we need show the full spectrum. We need the Asian version of Breaking Bad and Uncut Gems. I’ve brought this mindset onto my latest film that I’m editing right now, All Bark Never Bite. It’s inspired by works of Haruki Murakami and the Safdie Brothers. I’m planning on doing an event for the film later this year in Toronto in the late fall,” comments Phos.

Check out the short Talisman above which is currently hosted by ALTER.