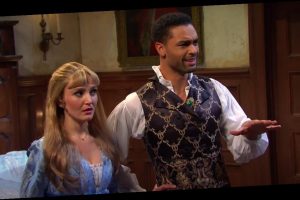 When Saturday Night Live announced Regé-Jean Page as a host, I knew a Bridgerton sketch had to be on the horizon. On Feb. 20, the Netflix star made his debut on the sketch comedy show and paid tribute to his beloved (and thirsted-after) character, the Duke of Hastings. Mentions of the regency era drama made their way into Page’s monologue, but he fully stepped into the duke’s shoes again for a creepy, comedic twist on the series’s intimacy coordination.

Page shared the screen with Chloe Fineman (who brought her spot-on Daphne impression to Studio 8H), as well as Pete Davidson, Mikey Day, and Kate McKinnon. In real life, Bridgerton‘s stars applauded their intimacy coordinator Lizzy Talbot for making them feel comfortable on set. However, SNL‘s twist turns the job into something incredibly cringeworthy. Thankfully, the skit was all for jokes — even Talbot found it hilarious.

“I always wondered about creating a ‘what not to do as an intimacy coordinator’ video,” she wrote on Instagram. “Turns out @nbcsnl got there first.” Don’t worry, the show’s actual Daphne, played by Phoebe Dynevor, also gave the skit her seal of approval on Instagram. She said Fineman and Page “killed it” with their parody. Watch the full skit above to revisit Bridgerton with an SNL spin.