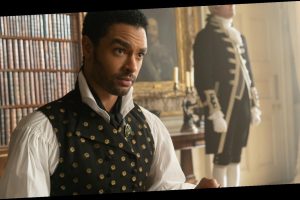 Regé-Jean Page has just joined the cast for an upcoming Hollywood blockbuster, and it’s a far cry from the world of Bridgerton.

Ever since the first series of Bridgerton landed on Netflix last Christmas, fans have been a little bit obsessed with the Duke of Hastings (known as Simon Bassett to his friends).

The dashing Duke, played by Regé-Jean Page, was such a hit with viewers that a fan account on Instagram – The Duke’s Spoon, created by Stylist’s Billie Bhatia – has earned over 23,000 followers.

Luckily, a second season of Bridgerton has now been confirmed. And while the story will focus on the romantic life of Lord Anthony Bridgerton, it’s likely that Page will also return to reprise his role as the Duke.

In the meantime, however, it’s just been announced that Page has signed up for a new project  – and it sounds completely different to the Regency world of wisteria and romance.

As per Deadline, Page has been cast in the leading role of Paramount’s upcoming Dungeons & Dragons movie. He will join will join previously announced cast members Chris Pine, Michelle Rodriguez and Justice Smith.

The film will of course be based on the iconic Dungeons & Dragons game franchise, which has been played by millions of people around the world for over 40 years.

This means that Page will be stepping into a fantasy world of sword-wielding, magic-making, war games, elves, treasure hunts and everything else in between. And we are very much here for it.

The female gaze: Bridgerton’s director Julie Anne Robinson explains why she trailblazed a new type of sex scene for the Netflix period drama

The Hollywood Reporter says: “It is not known whether the movie adaptation will be a straight-up fantasy film, set in the world of the game, or incorporate the storytelling and game-playing aspects.”

They’re all the details we have for now, but we’ll keep you updated when more are shared. And in the meantime, this is the perfect excuse to re-watch Bridgerton this weekend.