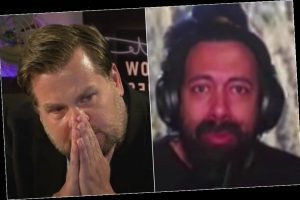 Reggie Watts, the bandleader on “The Late Late Show,” broke down in tears on Monday’s episode during an emotional conversation with host James Corden about racism.

Watts cried after recalling his family’s experiences of discrimination, noting his father had to reenlist in the U.S. Army and return to Vietnam after failing to find a job because he was Black.

The late night show is being produced remotely amid the coronavirus pandemic.

Corden started the broadcast by commenting on the wave of anger that has spread nationwide following the death of George Floyd in Minneapolis last week. Floyd, a Black man, died after a white police officer knelt on his neck.

Corden acknowledged he’d been “struggling all weekend wondering what to say to you here tonight, because who needs my opinion? Why is my voice relevant?”

“And then I realized that that’s part of the problem. People like me have to speak up,” Corden said, noting that “white people cannot just say anymore, ‘yeah I am not racist’ and think that that’s enough, because it’s not. It’s not enough. Because make no mistake this is our problem to solve.”

Check out the video here: