Remote School as the Gateway Drug to Social Media 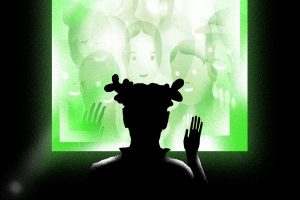 Several weeks into the new school year, I was sitting in my home office when I heard a series of beeps emanating from my phone.

Like many parents with children engaged in distance learning, I had set it up to let me know when their teachers posted a new assignment or made a change to the day’s schedule. But the sheer volume of notifications that afternoon seemed unusual and I soon saw why — my 9-year-old was in multiple, unsanctioned Google Hangout groups chatting with her friends. Within minutes, my phone had garnered 80 additional notifications — all with messages along the lines of an unending stream of “hi’s” or a parade of unicorn emojis.

This precipitous push into the social media deep end for my kids may seem relatively minor against the sweep of the pandemic. But for parents who did not expect to allow their children to have devices or use social media for many years, it is troubling.

Among the many changes in young children’s lives this year, the sudden access to the seduction of digital content and the opportunity for online communication with their peers compete for their attention. And with infection rates rising across the country, families may have to contend with distance learning, and all that comes with it, for the foreseeable future.

So what now? Do we consign our children to the social media flames and hope for the best? Or clamp down even tighter whenever they’re not on devices for schoolwork? Now that Pandora’s box has been opened, it’ll be difficult to dial back access once in-person school resumes.

Jordan Shapiro, a professor at Temple University and the author of “The New Childhood: Raising Kids to Thrive in a Connected World,” proposes a different tack. Long before the pandemic touched our shores, he’d advocated introducing digital and social media — which have become integral to modern society — to children earlier than traditionally advised (many social media platforms set 13 as the age when kids can open accounts).

“If you want to teach people how to deal with problematic interactions within a space that is part of our lives, then you don’t do it by ignoring it,” he noted. It’s also the reason Dr. Shapiro has never liked applying the language of addiction around screen use. “I actually want my kids to tell me what they’re doing on a screen,” he explained, “whereas I know that they’re not going to come home and tell me that they’ve tried smoking today — ever.”

Instead, Dr. Shapiro suggested, parents can incorporate digital play as part of family time, and “interact with your kids, get involved with your kids — especially when they’re little.” At this critical time (typically before the age of 12), kids yearn for conversations with their parents — whether it’s about the latest YouTube video they’ve seen or a new video game they’ve played — and parents should seize the opportunity to interject themselves into the development of their child’s inner dialogue.

The American Academy of Pediatrics also endorses the idea that parents should serve as media mentors to their children.

Part of the exploration parents can engage in with their children could also include interactions on a family social media account where parents “talk about how to share photos with relatives and ‘what is the appropriate way we comment on Uncle Joey’s posts,’” Dr. Shapiro said. This modeling of appropriate behaviors happens all the time in the physical spaces kids occupy and is just as crucial to model in their digital spaces.

Respect the Need for Communication

Although parents who see kids typing silly messages to each other — lines of emojis without words, a string of ha’s that take up half a screen — may think they’re meaningless, “for a lot of kids, this is their only way of communicating right now and we don’t want to cut them off,” said Eileen Kennedy-Moore, a child psychologist practicing in New Jersey and co-author of a free e-book, “Growing Friendships During the Coronavirus Pandemic.”

It’s important, however, to manage their expectations around responsiveness. “There could be a lot of reasons someone doesn’t respond in an online communication,” Dr. Kennedy-Moore said. Parents can help children learn to wait for responses from their friends by walking through possible scenarios together (they’re in class right now, their parents pulled them away).

When conflicts do arise, parents should conduct “a post mortem on interactions that went wrong,” said Dr. Jenny Radesky, an expert on children and media at the University of Michigan’s C.S. Mott Children’s Hospital. An example of this type of debriefing occurred recently with Dr. Radesky’s fifth grader, who had an argument over a chat because someone removed someone else from the group chat and another person renamed it. “It was just this little stupid drama, but we needed to unpack it and approach it with a problem-solving mind-set,” she said.

The latest on how the pandemic is reshaping education.

END_OF_DOCUMENT_TOKEN_TO_BE_REPLACED

END_OF_DOCUMENT_TOKEN_TO_BE_REPLACED
We and our partners use cookies on this site to improve our service, perform analytics, personalize advertising, measure advertising performance, and remember website preferences.Ok