BRUSSELS — Serge Schoffel placed a red sticker on the label for a 19th-century Dan Mano mask from Liberia. “This is my best sale,” he said.

Mr. Schoffel, a dealer based in Brussels, who has been trading in tribal art for 11 years, had just completed negotiations over a cellphone with a French collector during the Friday preview of the Brafa art fair. “We’ve been talking to him for some time, but this is the first piece he’s bought,” Mr. Schoffel said, adding that the wooden mask was priced between 20,000 and 30,000 euros, or about $23,000 to $34,000.

It was one of countless sales of artworks from sub-Saharan Africa that have been conducted in Europe since the colonial era. Belgium and France, two of the largest former colonial powers in Africa, have traditionally been the main trading hubs.

But specialists in this long-established business have become alarmed by a report commissioned by President Emmanuel Macron of France and published in November. Written by two academics, Bénédicte Savoy of France and Felwine Sarr of Senegal, the report recommends that French museums permanently return artworks that were removed from Africa without consent if their countries of origin ask for them back.

“It’s really stupid,” Mr. Schoffel, one of 10 tribal specialists among the 133 dealers participating this year in Belgium’s most prestigious art and antiques fair, said of the report. 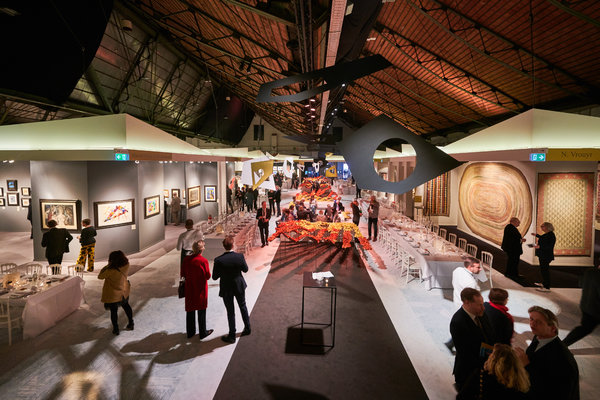 “Over the last 100 years, it’s been the work of Western scientists, collectors and dealers that has preserved these pieces,” he added. “Now we are looking like crooks.”

Soon after the report’s release, Mr. Macron announced that the Quai Branly Museum in Paris, which has 70,000 artifacts from sub-Saharan Africa in its collections, would send 26 objects looted by French troops in 1892 back to Benin.

Senegal’s new Museum of Black Civilizations has shown that Africa can create appropriate settings for such returns.

This cultural shift would seem, on the surface, to affect only the world of museums. But some dealers at Brafa pointed out that an embrace of restitution policies at public institutions could discourage private collectors from buying, loaning and donating African art. Sales from traders and auction houses would probably suffer.

International auction sales of tribal art — a classification that also includes Oceanic, pre-Columbian and North American pieces — stand at about €80 million per year, according to Aurélien Cuenot, chief executive and co-founder of Artkhade, a specialist database devoted to this market. African art represents the biggest sector, achieving €38.8 million in 2017 (Mr. Cuenot said final figures for 2018 weren’t yet available).

These numbers are relatively small compared to the billions spent at auctions of modern and contemporary art, but outstanding works can achieve impressive prices. In December a carved wooden neckrest from the Luba-Shankadi of Congo sold for €1.7 million at Sotheby’s in Paris.

Mr. Cuenot said it was still too early to determine how the shifting attitudes toward restitution had affected auction sales for African art. “We would have to wait until the end of the year,” he said, adding, “I don’t notice any effect on the market today.”

The West’s cultural institutions are under ever more pressure to consider returning disputed artifacts to their countries of origin. The British Museum is no stranger to such requests — Greece has long sought the restitution of the so-called Elgin marbles, and the government of Chile said last summer that it wanted a 1,000-year-old statue returned to the indigenous people of Easter Island. The construction of the Humboldt Forum museum, scheduled to open in Berlin at the end of this year with imperial treasures, has pushed Germany to re-examine its own involvements in Africa.

In Belgium, many of the 120,000 or so items in the collection of the recently reopened Africa Museum were acquired between 1885 and 1908, during King Leopold II’s brutal campaign to extract rubber and other resources from what came to be known as the Congo Free State — often through violence, terror or torture. During that period, as many as 10 million Congolese were killed outright or died from starvation or disease.

The French report recommends the restitution of “any objects taken by force or presumed to be acquired through inequitable conditions” during the colonial period. If these criteria are more widely applied, where will that leave the Africa Museum in Belgium, or the dealers offering Congolese artworks at fairs like Brafa?

“If you say the colonial period is a criminal period, then all these pieces are stolen, everything has to be restituted,” said Didier Claes, a tribal art trader based in Brussels who represented the art trade in a consultation meeting with Ms. Savoy and Mr. Sarr in June in Dakar, Senegal. “That’s the key problem with the report.”

At Brafa, Mr. Claes, who is of Congolese ancestry, was offering a collection of 33 wooden ceremonial combs from Angola and Congo. Around half of them had been sold by Friday afternoon, including an example from the Chokwe people of Angola priced at €30,000.

Mr. Claes said the report was too negative in tone and that the restitution debate should be addressed on a case-by-case basis. He added that, as a member of the African diaspora, he appreciated being able to see his heritage in European museums. “I’m so proud to go to an important museum and see my culture next to a Modigliani,” Mr. Claes said.

Mr. Macron has called for an international conference to be held in Paris this year to develop a policy based on exchanges of artifacts. Sharing, rather than restitution, could prove to be the preferred solution for problematic objects.

But until European and African institutions have agreed on firm guidelines, the tribal art trade — and its clientele — remain jittery.

Mr. Schoffel said that one of his wealthiest clients had already stopped buying African pieces, shifting to modern and Chinese art. “Some of the richest collectors are worried about investment and the bad atmosphere,” he said.

Bernard de Grunne, a dealer whose booth at Brafa included strikingly attenuated sculptures by the Dinka people of South Sudan, said the fair was quieter than usual.

“Restitution is making people a bit nervous about spending a lot of money,” Mr. de Grunne said. But, he added, referring to current geopolitical turmoil, “so is the general situation.”