The choreographer Twyla Tharp has been a classicist, a modernist, a postmodernist — often at the same time — and maybe now and then a feminist and a Romantic, too. She also has a strong streak of the clown: tough, solemn-deadpan, with crazy timing, making a joke of how impossible things can be.

Now, in “Minimalism and Me,” a production that began life last year in Chicago, and which is currently at the Joyce for four weeks — with six Tharp dancers, some old films and photographs, and 10 other people playing onstage audience members — Tharp reminds us that she was once a minimalist. It’s evident that this was just an early phase: Minimalism wasn’t big enough to contain a temperament with her streaks of rococo excess and genre crossover, but she wryly tells us that her work from then on had to do with “less is more,” as she takes us through 10 works she made from 1965 to ’71.

Increasingly since the 1980s, Ms. Tharp has become a memoirist, too — in writing, on TV (using film of her earlier work) and in live performance. Reading from a lectern onstage, she narrates the first half of this show, a retrospective of her first seven years of making dances. In her earliest work, “Tank Dive” (1965), she stayed in motionless dance positions for whole minutes while Petula Clark’s “Downtown” played; she now connects this to the painters Barnett Newman and Frank Stella, whose studios were close to the loft where she lived at the time, on Franklin Street in New York. 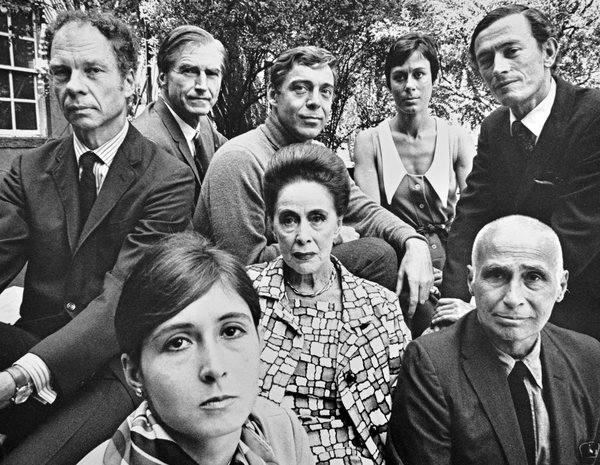 Minimalism is her starting point; “Me” (or at least her work) is her main fascination. Yet she is our most obvious problem here: Her way of talking mixes seriousness and comedy in an awkward amalgam and in vocal tones that lack any spontaneity. Both her vocal delivery and her dances get laughs at some unlikely moments, while some of her funniest lines elicit no reaction. And, though she’s keen to demonstrate the creative sophistication she quickly built up in the 1960s, she seems to be rewatching her early work impatiently, with the fast-forward button. The excerpts are fascinating but, until we reach 1970, too brief.

By 1968, she was famous enough to be included in what has become an often-reproduced Jack Mitchell photograph of eight modern-dance artists of several generations: Martha Graham at its center, and featuring José Limón, Erick Hawkins, Merce Cunningham, Paul Taylor, Don Redlich, Yvonne Rainer and the youngest, Ms. Tharp. In excerpts from the late-1960s — there are snippets of original-cast film, too — you see the emergence of Tharpian style. This included the shrug, the shimmy, the wriggle. When I first experienced her work, in 1980, it was the most kinesthetically intoxicating dance style I’d ever experienced.

It is not Ms. Tharp’s task to make connections between herself and other choreographers of her time, but that photograph is not the only reason many of us will do so. Taylor’s 1950s experimental pieces, not least “3 Epitaphs” (1956), seem to have been an influence, and when we see the different solos coinciding in one space, we’re likely to think of Cunningham. These early works, and that Tharpian style itself, all have a pronounced kinship to Ms. Rainer’s development of “democratic dance” (non-virtuoso movement related to the everyday).

We see only half of the 20-minute work “The Fugue” (1970) at the Joyce, but that’s enough to show why she considers it her real Opus 1. (It’s the earliest work she has regularly revived.) An arrangement of 20th-century tap-related movement sequences in baroque-type musical structures — less a single fugue than a series of mini-fugues, with no music than the sound made by the dancers’ hands and shoes — it made her the formal classicist of her generation. But its blend of seeming informality and objectivity has always looked related to other dances from her generation, like Ms. Rainer’s “Trio A” (1966) and Trisha Brown’s “Opal Loop” (1980).

Its first cast was made up of three women. (Viewers saw it as women’s liberation onstage.) B y the time I first saw it in 1980, it had three men, but other combinations have been used. On Wednesday, it was danced by Kara Chan, Kellie Drobnick and Reed Tankersley — elegantly, exactly, charmingly. I find these dancers somewhat slick when I compare them to the Tharp stylists I watched in the 1980s, but that’s not a new complaint: Today’s Tharp dancers, almost too accomplished in lines and rhythms, lack the juicy, weighty texture that emanated from their predecessors’ whole body language.

That’s true also of the one full piece shown here, “Eight Jelly Rolls” (1971), the first piece she made to fit its musical accompaniment (old jazz recordings by Jelly Roll Morton and Charles Luke), and one of her greatest comedies. Since Ms. Tharp has staged this with the assistance of Sara Rudner, the greatest of Ms. Tharp’s collaborators — I was lucky to see them both in this work and others — trouble has certainly been taken.

Here, too, men now have some of the originally female roles. There are marvelously right moments, as when Ron Todorowski suddenly suspends a gesture of both arms in midair; Ms. Tharp’s drastic contrasts of dynamics are often brilliant. This “Eight Jelly Rolls” — its dancers dressed in white, replacing the previous black — is alive, if lightweight. I’m glad today’s audience can see it.

It’s immediately followed by a new encore that Ms. Tharp has added: a Jelly Roll sequel of sorts in which she dances, too, in her consciously eccentric way. The main joke is that she’s chasing to keep up. I’d like to join in the applause for this flimsy footnote: She’s in good shape, and it ought to be fun to see her back in clown mode. Perhaps the comedy will click into focus as the Joyce run continues.