Review: A Chic but Dull ‘Tenant’ With James Whiteside

Apartment life can be a nightmare. You move into a new place and discover something left by the previous tenant, reminding you that the place isn’t new at all — that you might have inherited someone else’s problems. And the neighbors! You can’t be quiet enough for them. If you so much as walk, they start banging on the walls. It could drive a person crazy.

That’s what happens to the main character in “The Tenant,” a 90-minute dance-drama that had its premiere at the Joyce Theater on Tuesday. Except that this story is rather more extreme. The previous tenant killed herself. And the new tenant, played by the American Ballet Theater star James Whiteside, moves not just into her room but all the way into her persona and pain.

This, in other words, is a psychological thriller — like the Roland Topor novel on which it is based or the more famous (and love-it-or-hate-it campy) 1976 Roman Polanski film adaptation. Directed and choreographed by Arthur Pita, it is chic, well made and impressive in just about all aspects except the ones that matter most.

It’s hard to imagine anyone reading the novel or watching the movie and thinking, “This needs to be a dance!” Apart from the suicide — a balcony leap — the story is unusually low on dramatic action. For long stretches of this “Tenant,” it can seem that all Mr. Whiteside does is undress and dress, go to sleep and wake up. This isn’t dull, though. The dancing is. 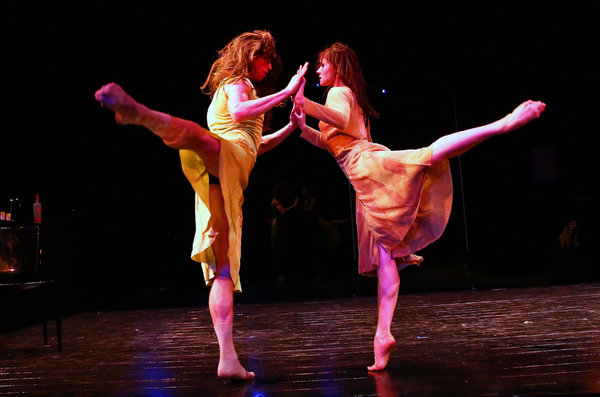 In that discrepancy lies what’s right and wrong about the production, its shiny skill and its fatal flaw. So many of the ingredients are high grade. Mr. Whiteside is a gorgeous dancer with more than enough star power to carry a show. He gives this one his all (and bares it all, too). As the previous tenant, his Ballet Theater colleague Cassandra Trenary is gutsy and explosive, beautiful and touching even when trying to do herself in. Kibrea Carmichael, as a woman Mr. Whiteside brings home for some acrobatic sex, is exceptionally striking.

Their versatility is topped by that of the composer, Frank Moon. Visible beside the stage, he plays late-night jazz and spooky chords on the piano, switching to violin, jaw harp or high-pitched vocals to regulate the mood expertly. The sound of breaking glass in his score is the production’s most artful device of suspense.

Scene to scene, Mr. Pita’s direction is sure-handed and clear, adeptly doling out thumping from unseen neighbors to bring on madness. But whenever the dancing starts, the tension drops. The strongest section, choreographically, comes near the end, when Ms. Trenary reprises the suicide dance that starts the show, and Mr. Whiteside, now dressed as her, replicates it a few seconds behind. For a moment, the dancing reveals something about the story that only dancing can.

But most of the choreography seems superfluous and jumbled, its strained attempts at psychological extremity at odds with its show-off dance effects and the narrative’s established naturalism. The elements don’t cohere, especially not Mr. Pita’s is-that-supposed-to-funny surrealism, like the Little Dutch Boy lawn ornament that belches smoke.

Throughout “The Tenant,” the lingering question just grows louder: Why was it made? Although it is set in the near future, it struck me as oddly retrograde. More than tension, what rises is a suspicion that the true justification and purpose for the work is merely to allow Mr. Whiteside to go full frontal and wear a dress. And aren’t there simpler ways, in 2018, to do that?

The Tenant
Through Sunday at the Joyce Theater, Manhattan; joyce.org.