Robert Ashley’s “Improvement (Don Leaves Linda)” isn’t the first opera to have its heroine pathetically forsaken in an American desert. Puccini’s “Manon Lescaut” starts its final act in one, with the title character “alone, lost, abandoned,” as she cries in a majestic outpouring of an aria.

The Linda of “Improvement” — which was written in the 1980s and is being given a soulfully austere revival at the Kitchen in Chelsea through Feb. 16 — doesn’t get to vent her feelings quite so extravagantly. For one thing, she’s left by Don, her husband, at a distinctly unoperatic locale: a highway turnoff.

For another, her voice rarely rises much beyond the soft singsong-y speech that’s characteristic of Mr. Ashley’s mature works. Her most sweeping solo is a kind of monologue; she mulls in a quiet flood of gently rhythmic talk how she has “driven my husband from me by my complacency and my indifference.”

[Read about the pleasures and perils of reviving Robert Ashley.]

But even if Linda’s story never overtly expands far beyond the everyday — a coffee, a late-night rendezvous in a deli, a letter from her son she reads aloud — our 90 minutes with her and the people she comes across take on a lulling, mesmerizing grandeur as episodes and years pass.

This is in large part because Gelsey Bell, the production’s Linda, has a silky yet focused voice that securely handles Mr. Ashley’s rush of wryly absurdist text. Her big, moist eyes shift from fear and sadness to a kind of consolation, weariness and resignation — from innocence to experience.

This trajectory isn’t merely personal. “For the sake of argument,” the narrator (a recording of Mr. Ashley, who died in 2014) tells us near the beginning, “Don is Spain in 1492 and Linda is the Jews.” 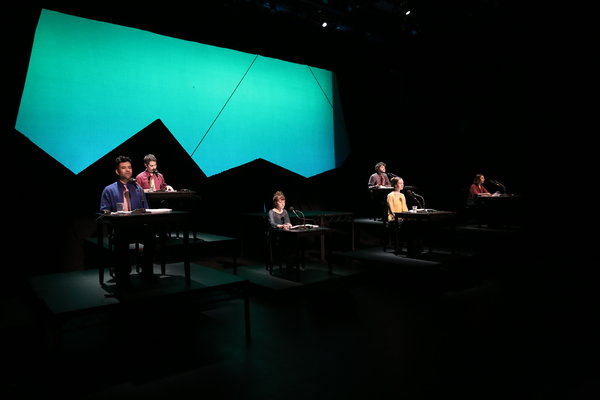 The various places and people in their path, moreover, represent figures and themes in the history of the Jewish people in the centuries since the Spanish expulsion. An airline ticket counter representative with a lot of questions is meant to evoke the Inquisition; the big city to which Linda eventually moves is, in the allegory, assimilation.

If this seems like too much and too weird to take in on a first listen, it is. There’s little overt drama: The six performers sit at six small tables on platforms, recite-singing into microphones. (The change of scenes is evocatively captured in the saturated sky of a distant mountain range in the background of David Moodey’s set.) Many listeners will just perceive the alluringly enigmatic stories being told: Taken together, they’re a sun-baked, ominous American gothic that’s like a quieter version of Don DeLillo, Thomas Pynchon or Nathanael West.

But even an initial brush with “Improvement” is an experience of hypnotic vocal virtuosity — the cast makes its way through an enormous quantity of words with choral synchronicity and stunning clarity — and emotional weight, rueful humor and a pleasant sense of bathing in idiosyncratic charm. Though we come to know Linda only in impressions and episodes, she comes sympathetically to life.

“Improvement” was originally conceived as a recording. Tom Hamilton’s electronic background score — a cool, smoothly droning landscape marked by little pops, bits of flute, faint taps of steel drum and the occasional shimmer — was for a long time inextricable from the vocal tracks. So when the piece was done live, the performers essentially had to duet with their own recorded selves.

For this new staging — developed by Mr. Ashley’s widow and longtime collaborator, Mimi Johnson, in conjunction with its cast (Ms. Bell, Brian McCorkle, Paul Pinto, Aliza Simons, Dave Ruder and Amirtha Kidambi) — the electronics have been created anew, and the performers have been freed.

But Mr. Ashley always makes you think about being free — “if there is any meaning to that word,” as Linda says. His interpreters work under precise constraints, not least the steady pulse of 72 beats per minute that defined his essential works, including much of the tetralogy “Now Eleanor’s Idea,” of which “Improvement” is the first part.

But within those restrictions, there is a universe of choices as to diction, emphasis, mood and volume to be explored in Mr. Ashley’s style, which is controlled yet capacious. There’s ample room for the adjustment and, perhaps, yes, improvement that is Linda’s story, and ours.