Review: Blue State Blues Meet the Black of Night in a Thrilling ‘Shipwreck’

LONDON — Why are we listening to this conversation again? It’s the same one that many of us have been having for more than two years — and for what feels like forever. And it’s not as if any of the observations being made here are at all new. Why go to the theater to hear our own unoriginal and distressing thoughts echoed back at us, and none too pleasantly at that?

So ran my feelings during the first half-hour of “Shipwreck, a History Play About 2017,” Anne Washburn’s truly thrilling, truly original fantasia of a drama, which had its world premiere on Tuesday night at the Almeida Theater here. (Another question: why does this New Yorker have to cross an ocean to see what promises to be this season’s most exciting American play?) The subject of this long and winding work is the great American myth known as Donald J. Trump.

Yeah, him again. And he is indeed the unvarying topic for a group of friends gathered for a relaxing upstate weekend away from New York City in what at least a couple of them had hoped would be a no-Trump zone.

No such luck. Ideas — silly, solemn, trivial, terrified — about the meaning of Mr. Trump are the appetizer, main course, dessert and even the equivalent of recreational drugs in the lonely farmhouse recently purchased by the New York couple Jools (Raquel Cassidy) and Richard (Risteard Cooper). Other — and by no means unrelated — subjects include racial privilege, tabloid gossip (Ivanka vs. Melania!) and the impotence of an art form called theater to instigate political action.

Jools and Richard’s guests include two other couples: the affluent lawyers Yusuf (Khalid Abdalla) and Andrew (Adam James); and the bohemians Teresa (Tara Fitzgerald) and Jim (Elliot Cowan). Then there’s the internet-addicted, Ivanka-obsessed Allie (Justine Mitchell), a cheerleader for political activism that she never seems to follow through on.

The recriminations and regrets they exchange about the 2016 presidential election and its consequences bear an embarrassing resemblance to what I’ve heard from many friends, relations and like-minded strangers on that unavoidable topic. And these have usually been recycled, as if brand-new, from opinion pieces in The New York Times, The Washington Post and The New Yorker.

Nonetheless, even in my early minutes of agnosticism, I found my attention hooked — and held, wriggling — despite myself. This partly has to do with the director Rupert Goold’s tantalizing evocation of a tribe on the edge of a devouring cosmos, and also with the irresistible fluency of the seven performers playing friends gathered in the dead of a wintry night.

Is it because they’re fish in a purpose-built satirical shooting barrel? If that were true — or exclusively true — there’s no way we’d be hanging on every word of these querulous, increasingly scattershot theorizers, kibitzers and confessors. But instead Ms. Washburn has created a host of dramatis personae who are just a tad too high strung, burned out, paranoid and guilty to be what they initially seem. 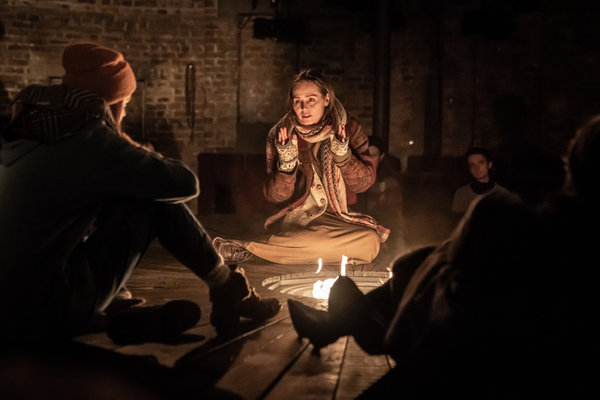 And as the night thickens, and the snow piles up, and the electricity fails and the food runs out, these ostensibly standard-issue, true-blue New Yorkers find themselves on a path into a subterranean realm that is both darker and brighter than any place they’ve been before. Of course, if they had been a bit more self-aware, they would have known it was the inevitable end point for all they’d been discussing.

And here is where I must warn you, dear readers, that while I always try to honor the Code of the Spoilers, there are certain aspects of this production that are revealed only by degrees. But to appreciate the greatness of Ms. Washburn’s accomplishment — and, yes, I just used the “g” word — you need to know about what’s waiting for you here in the blackest midnight of these characters’ souls.

Granted, there are visible clues as soon as you step into the Almeida. At the dead center of the theater is an immense, battered round table, with many, many chairs pulled up to it. It may be that you, as an audience member, will be seated in one of them. And if you are among such an elect, there may come a time when you may no longer recognize yourself, or those seated beside you. (This might be the point to mention that the gobsmacking surprises of décor and attire are by the set designer, Miriam Buether, and Fly Davis, who did the costumes.)

But there, I’ve said too much. What’s on entirely open view from the beginning is a totem pole and a huge animal hide (presumably a bear’s) nailed to the wall. Clearly, something primeval is on the prowl. And as the night wears on, and people get drunker and wearier and more wired, their imaginations will take them into a land that is sacred and profane, apocalyptic and eternal, where a gold-skinned god with a New Yawk accent tempts a man who believes in the sacredness of the constitution, and the institutions it protects.

The name of the man being tempted is … Well, if you’ve paid attention from the beginning, you’ll know it’s that same public servant who appeared to us — fleetingly, parenthetically — in the very first scene.

From the beginning you will also become acquainted with several other, seemingly irrelevant characters, the last previous tenants of this farmhouse: a father, a mother and their adopted Nigerian son. Pay close attention to that young man, whose name is Mark (the quietly charismatic Fisayo Akinade), for he holds the key to the play’s ultimate secret. Hint: it is not a political secret, or not exactly.

For as in her fabulous “Mr. Burns, a Post-Electric Play” — which traced the evolution of an episode from “The Simpsons” into a heroic, Homeric narrative for a Dark Ages of the future — Ms. Washburn is pondering our atavistic hunger to tell stories to make sense out of life. And she knows that when characters like those of “Shipwreck” are faced with what seems inexplicable to them, their so-called enlightened minds may find themselves wandering into primal, mythic realms — where there be dragons and demons and amoral Dionysiac gods.

Such fantasies — fueled in part by sleeplessness and drunkenness — draw from recesses of memory these characters haven’t looked into recently. Taking-off points in the play (which could still benefit from trimming) range from the Bible to “The Lord of the Rings,” from MTV music videos to contemporary YouTube loops. Such references inspire a teeming, eclectic visual vocabulary reflected in Luke Halls’s genre-blending video dreamscapes and the pregnant campfire spookiness of Jack Knowles’s lighting.

But who ultimately is the storyteller in charge here, the great purveyor of all these fears and fantasies, this imaginer of the imaginings of others? I mean, aside from Ms. Washburn, who would probably disavow ultimate responsibility.

There is a final answer to this question, sort of, but don’t take it as the last word. “Shipwreck” is wrapped in so many layers — of narrative, of interpretation, of mutating thoughts — that it should be stifling. Instead, it finds a paradoxical exhilarating brightness — and most important, a boundless empathy — within its endless night.

Shipwreck
Through March 30 at the Almeida Theater, London; almeida.co.uk.