Review: E Pluribus ‘Nutcracker,’ as a British Critic Signs Off

Researchers have found that over half the world’s “Nutcracker” productions take place in the United States. What matters, though, is that a high proportion of American “Nutcrackers” are good. I’ve seen many European versions of the ballet — British and Russian included — and remember the early onset of “Nutcracker” fatigue. Here, however, I’ve found myself hungry to keep seeking more productions and to revisit the best ones. Nutcrackering became for me — a British dance critic working in New York since 2007 — a happy way to discover America.

On Sunday, as my last task as the chief dance critic of The New York Times, I chose to take the ferry to Staten Island to see the Vicky Simegiatos Dance Company perform the ballet at the St. George Theater. This was at least my 35th American production in 12 years; both the theater and the production justified the trip. 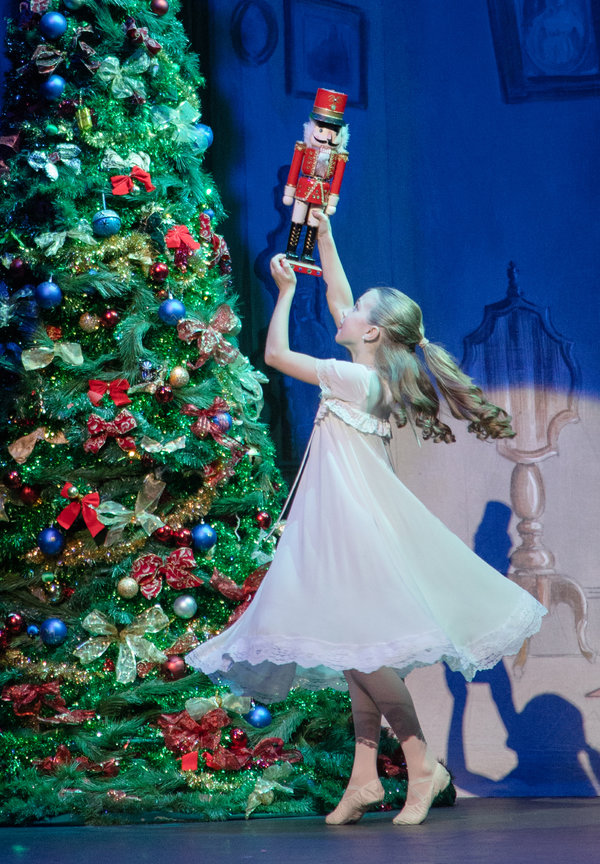 The St. George is a marvel too little known outside Staten Island. The 2,800-seat theater, built in 1929, was intended as a home for vaudeville and cinema to vie with those across the water on Broadway. After coming close to demolition at the start of this century, it has been lovingly restored. The foyers and balconies are fabulously ornate. Auditorium, front-of-house areas and even restrooms are spectacular.

The Simegiatos company, founded in the early 1980s and based in Brooklyn, is something of a family industry. It’s a matriarchal organization: Vicky, the president, artistic director, and main “Nutcracker” choreographer, is assisted by her daughters, Matina (first vice president, ballet mistress, and co-choreographer of “The Nutcracker”) and Despina (second vice president). Matina and her husband, Voytek Sporek, play Frau and Dr. Silberhaus, the parents — often named Stalhbaum in other productions — of Clara and Franz.

On paper, this all might sound parochial. Onstage, the levels of technique and theatrical projection are remarkably high; and there are dozens of adorable and well-drilled children. At one point in the Battle of Mice and Toy Soldiers, 12 truly tiny child-mice crawled on all fours, very precisely, across the stage, unable to hide their complete delight at contributing to the show. (This will remain one of my favorite “Nutcracker” memories.)

Act 2 started with 12 equally tiny angels — some of them the same performers from the mouse scene — now upright but no less blissful, through whom six larger cherubs danced in bigger steps. These children were already good professionals: Later in Act 2, when two child Gumdrops lost their headdresses (one also lost a shoe), they handled the situation adeptly, kicking or throwing the items out of view as quickly as possible. The child performer Alisa Zakovics was an exceptional Clara: a lovably innocent character with astonishingly proficient dancing.

Like so many “Nutcracker” productions, the Simegiatos version is performed for just one weekend, but surely is the result of months of industrious rehearsal. It has charming scenery and good costumes, but its Tchaikovsky music is taped, with long pauses between numbers. I found myself going along with all its directorial decisions but two: Patricia Casola, a woman in male attire, made a schoolmasterly Herr Drosselmeyer without fantasy, while the prolonged silence before the Waltz of the Flowers gave cause for alarm.

Few “Nutcrackers” tell the same story or even use quite the same score. (For connoisseurs, this is part of the fun: Which music will we hear next?) I enjoyed the overture being used to show us the magician Drosselmeyer at work on his four dolls. As it concluded, when he sprinkled silver dust, they came to life and danced offstage.

So, yes, another good American “Nutcracker.” I come from the land where Richard Buckle once wrote, “Well, we are one more ‘Nutcracker’ nearer death.” What is it about “The Nutcracker” that suits the United States? The ballet’s love of hospitality, its innocence, travel adventure and transformations, its positive, outgoing energy and its cornucopia of stylistic diversity are all right for this country (which Tchaikovsky visited, enjoying immense success, between composing the two acts).

I have seen, but without pleasure, Realms of Sweets that are fenced or walled enclosures. The décor for the Colorado Ballet production, if memory serves, is the opposite: a spreading landscape, with islands and meadows and mountains all made of confectionery, as endearing as sweet. Just now it’s particularly good to see a Realm of Sweets that admits characters from many nations. On the way back from Staten Island, the Statue of Liberty seemed a perfect part of a “Nutcracker” day. Like the Sugar Plum Fairy, she welcomes strangers and embraces diversity.