Home » Entertainment » Review: In ‘God Said This,’ a Hot Mess of a Daughter Heads Home

Review: In ‘God Said This,’ a Hot Mess of a Daughter Heads Home

Whether identifying as black, female, Latinx, queer, trans, Native American, Asian-American, Arab-American, disabled, Muslim, biracial or any combination thereof, playwrights traditionally marginalized in the theater face a second problem if their work finally ekes its way to the stage. They often feel pressure, from critics and producers, to depict globally and endorse unequivocally their diverse communities — which is bad for them and worse for their stories.

Call it vexation without representation.

Leah Nanako Winkler isn’t having it. In a note to the script of “God Said This,” which opened on Tuesday at the Cherry Lane Theater in a bumpy ride of a production, she urges directors and actors — and, by implication, audiences — to see the multiethnic family at the heart of her play as “deeply flawed, complex people” who are “not defined by their race.”

Nor by much else, it seems. She sets out not only to bust stereotypes about submissive Japanese-American women but also to rescue hick Kentuckians, intolerant Christians, “tiger moms” and even the dying from the broad brush of caricature.

Mission accomplished, though at a cost to coherence. Hiro, the daughter of a Japanese mother and a white American father, is no meek good girl; she’s more like a hot mess. The last time she came home to Lexington from New York — a disastrous visit that was the subject of Ms. Nanako Winkler’s “Kentucky,” seen in New York in 2016 — she nearly ruined her sister Sophie’s wedding and wound up having sex with an acquaintance on the roof of their old school.

“The ugliness inside of me is seeping uncontrollably through my skin,” she explained.

In “God Said This,” which takes place seven years later, Hiro (Satomi Blair) doesn’t behave much better. In town to see her mother, Masako, who is undergoing chemotherapy for an aggressive cancer, she once again winds up getting plastered and trying to make it with a former classmate she assumes is a rube because he never left town. But John (Tom Coiner) has too much sense to get caught up in an affair with someone as needy as Hiro; he has a master’s degree, a keen wit and a son he loves. As the script instructs: “Don’t put John in flannel.”

Mostly, Hiro picks fights with Sophie (Emma Kikue), a born-again Christian whose faith, despite Hiro’s ridicule, is honored in the play as a source of solace and a means of survival. 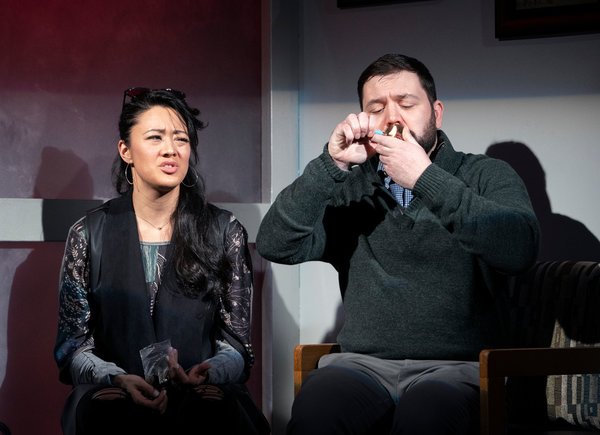 What both she and Hiro had to survive, and what Ms. Kikue and Ms. Blair render convincingly in very different ways, is the abuse their alcoholic father, James, rained down upon them throughout their youth. And even though he is in recovery now — a series of “sharing” monologues frames and punctuates the play — his daughters have trouble forgiving him, if not for their sake then for their mother’s. They see it as a terrible irony that she, who never harmed anyone, is dying, yet he, who nearly destroyed them all, recovered miraculously from stage four cirrhosis.

Still, Ms. Nanako Winkler makes more of James (Jay Patterson) than a semi-reformed backwoods daddy monster. He is a rock collector and a bird fancier who was himself the victim of abuse. (Of his mother he says, “May she rest in hell.”) As portrayed by Mr. Patterson, he is both awful and appealing, forcing you to consider how those two traits may be linked.

And in Masako, warmly played by the actress Ako, “God Said This” conjures an almost saintly woman who is nevertheless feisty and strategic in trying to turn her illness to some good for her family. At the same time, her suffering isn’t sugarcoated. It’s no surprise to learn that the portrait comes from direct observation: Ms. Nanako Winkler wrote much of the play while sitting with her own mother, who was undergoing chemotherapy for the same cancer in a hospital back home in Lexington.

But if authenticity and specificity are not problems here, the play, working so diligently to unpack ethnic and social stereotypes, falls right into the theatrical kind. This is the familiar “family with too much crazy going on” variety, a very popular dramatic cliché. To be fair, it is also a very popular reality.

Still, this Primary Stages production, directed to emphasize the extremes by Morgan Gould, feels like watching the action at a bumper car rink: an endless cycle of collision and regrouping, with pieces of plot hurtling at the characters from every direction. Did I mention the car accident? The bike accident? The petty theft and malfunctioning ovaries?

Young playwrights — Ms. Nanako Winkler is 34 — often try to show us everything they can do, but I am more impressed by everything they know. In “God Said This” I was drawn, despite the otherwise constant careening, to quiet moments of insight into character. Hiro’s reflexive unpleasantness is gradually unpeeled to reveal how the trauma of her childhood has turned her idea of relationships into transactions. When John rebuffs her romantic overtures by saying their relationship is “100 percent platonic,” she is baffled: “I don’t understand why you’d want to hang out with me then.”

And it is John who says that hating her father, even if he’s a nightmare, is “so entitled.”

Moments like that help me understand why “God Said This” received the Yale Drama Series Prize last year despite its ungainliness. When it gets out of the way of its big agenda it has wonderful small things to say.