That, at any rate, is the setup for “Hurricane Diane,” an astonishing new play by Madeleine George that whirls ancient myth, lesbian pulp, ecological thriller and The Real Housewives of Monmouth County into a perfect storm of timely tragicomedy.

Understand that we are talking about a small-g god, Dionysus to be exact; the back story of “Hurricane Diane” is “The Bacchae.” In that Greek drama, you may recall, the lord of wine and ecstasy (and theater) avenges himself on a complacent society that has turned its back on his ecstatic religion.

In “Hurricane Diane,” which opened on Sunday at New York Theater Workshop in a production directed by Leigh Silverman, the complacent ones are four women living on a cul-de-sac in flood-prone Red Bank, N.J., in four houses with identical floor plans. (One shiny, high-end kitchen, designed by Rachel Hauck, serves as the set for all of them.) Over coffee and giant glasses of Zinfandel, they gather to discuss the latest gossip and ignore the latest portents.

Ms. George has fun with these women — or girls, as they call themselves — but does not mock them. Rather, with loving attention to sitcom rhythm, she gradually anatomizes the emptiness that animates their “Golden Girls” chatter. It is left to the costume designer, Kaye Voyce, to pin them to the wall like butterflies in a natural-history museum.

At the softer end of the spectrum, in creamy Eileen Fisher separates, Renee (Michelle Beck) struggles with being “the highest-ranking woman of color on the masthead of any shelter magazine in America” — a job she suspects may be immoral in its selling of pernicious lifestyle fantasies. And poor Beth (Kate Wetherhead), draped in what appear to be damp handkerchiefs, has just been ghosted by her husband.

Into this backwater of frustration comes Diane (Becca Blackwell) — Dionysus in modern drag as a landscaper with a longstanding (centuries-old!) interest in permaculture.

Her agenda is somewhat at odds with that of her would-be clients. Where Carol imagines a wrought iron accent bench in the backyard, Diane intends a primeval forest of pawpaw and milk vetch. Where Pam sees a little Italian garden with roses and a fountain, like the one in the mural at a nearby restaurant, Diane plans the restoration of the entire North American landmass. 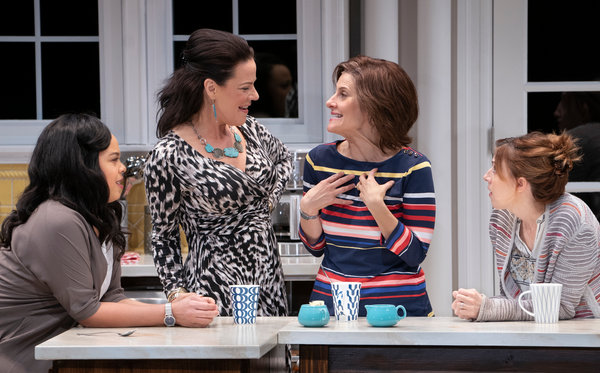 In other words, if the girls think they are treading water emotionally, Diane is there to show them that there is far worse in store. With the “cosmic clock” already at 11:45, and storm surges arriving at the Jersey Shore with increasing regularity, they may be treading water for real before long. Their only chance for survival is if Diane can undo what modernity has done to them in turning their rightful maenad madness into mere home-improvement mania.

To reverse this course, she sets out to seduce them each into her cult. This she does literally and handily — with one holdout.

Becca Blackwell, a downtown performer who exists “between genders,” is ideally cast as the charismatic pansexual deity, whether rocking a Greek tunic and vegetal tiara or long shorts, wool socks and work boots. As Dionysus’s nonbinary energy jangles the wiring of the staid suburbanites, releasing something wild in them, it also unleashes something wild in the play.

Indeed, in the second half of its intermissionless 90 minutes, “Hurricane Diane” sometimes seems to spin so fast that Ms. Silverman’s staging cannot keep up. Though the play is a coproduction with WP Theater, it would need even greater resources to do full credit to the scenes in which ecological revenge and Dionysian frenzy blur into one howling terror. The sound design (by Bray Poor) and haunting original music (by the Bengsons) help patch over the problem; even so, reading the script later, I was surprised to discover I’d totally missed a major plot point near the end.

But this does not invalidate the achievement. Ms. Silverman’s control of the tone in the first half, along with the hilarious but grounded work of the cast throughout — Ms. Skraastad needs her own sitcom, pronto — serves the play’s intentions beautifully.

Ms. George is not, in any case, a plot-first kind of writer. Rather, she seems to begin with themes and ideas that fall into a kind of rhyming pattern and then make them do somersaults. In “The (curious case of the) Watson Intelligence,” a Pulitzer Prize finalist in 2014, she riffed on the coincidence of Sherlock’s sidekick, Alexander Graham Bell’s assistant and IBM’s natural-language computer all sharing the same name. The trick is making it not just a trick.

In “Hurricane Diane,” commissioned by Two River Theater, itself in Red Bank, she fully succeeds. The various threads of her interest get tied almost excruciatingly tight by the larger disaster she means to discuss. It is not, directly, the disaster of ecocide; she wittily, hopefully defines the play’s time period as “Early Anthropocene” — not “Late.” It’s still 11:45, after all.

The disaster, rather, is human nature, so attentive to the needs of individuals, so impervious to the world’s. Nor is Ms. George letting urban playgoers off the hook by setting the story in the emerald-lawn suburbs. The spirit of smugness, of furious resistance to change, belongs to everyone; water roars down avenues as easily as cul-de-sacs.

And if the terrible tide is too strong for one butch, modern-day Dionysus — or one play — to turn, at least “Hurricane Diane” is a hell of a start.