Home » Entertainment » Review: In ‘Sun & Sea,’ We Laze Away the End of the World

Review: In ‘Sun & Sea,’ We Laze Away the End of the World

In May 2019, as the art world raced through the first preview day of the Venice Biennale, a tiny number of us set off for a naval base in the northeast corner of the city.

There, inside a damp storehouse commandeered as an ad hoc pavilion for Lithuania, we ascended a scaffold and looked down on a startling sight: a large sandy beach. Beneath us, children played with buckets and shovels; dogs dozed and yapped; and a cast of more than a dozen sang of delayed flights and exploding volcanoes to a spare, insistently catchy electronic score.

No one had pegged this as a highlight of the biennial. But it quickly became clear that it was a masterpiece of culture in a changing climate: a dismayingly rare subject for art, given its urgency. Three days later “Sun & Sea” (the title, like the music, is only superficially benign) won the show’s top prize, the Golden Lion, even as its three young Lithuanian creators — the director Rugile Barzdziukaite, the librettist Vaiva Grainyte and the composer Lina Lapelyte, working with the Italian curator Lucia Pietroiusti — hustled to secure funding to finish the run.

“Sun & Sea” is now on tour, though the pandemic has not made it easy. The beach re-emerged earlier this summer in an empty Bauhaus swimming pool outside Berlin; in a warehouse in Piraeus, Greece; and in the orchestra level of an 18th-century Roman theater. It arrived this week at the BAM Fisher in Brooklyn, where its largely Lithuanian cast (some of whom have been with “Sun & Sea” since its first presentation at the national gallery in Vilnius in 2017) has been beefed up with New York-area supernumeraries who have substantially upped the beach’s tattoo quotient.

Compressed into the Brooklyn Academy of Music’s black box theater, the opera has lost some of its vertiginous impact. And its reveries of carefree international travel have the slight feel of a prepandemic time capsule. But “Sun & Sea” remains one of the greatest achievements in performance of the last 10 years: wry, seductive and cunning in ways that reveal themselves days or years later. This is a performance that makes the extinction of the species feel as agreeable as a perfect pop song, and as unforgettable, too.

The New York run is sold out, though standby tickets are available, and tickets are going fast for subsequent stops in Philadelphia, Los Angeles and Bentonville, Ark. Here it’s being performed for five hours each day, and ticket holders can enter at half-hour intervals and stay as long as they wish. (The score runs in a loop of a bit over an hour.)

Looking down from a mezzanine, you see the beachgoers sing solos or duets of a few minutes apiece, interrupted sometimes by errant children or a flying beach ball. Two lovers debate what time to wake up to get to the airport the next day. An older woman reads the multilingual label on her sunscreen tube. A nouveau riche mother (the soprano Kalliopi Petrou, on a chaise longue) extols her recent Australian family vacation, the free piña coladas and the coral with its “bleached, pallid whiteness.”

Only gently, distantly, do these characters perceive that the summers are a little hotter than before, that the waves are a little scarier. A young woman with a yoga mat and a self-help book (Nabila Dandara Vieira Santos, lying on a beach towel) marvels at the red sundresses, the green plastic bags, the fish-killing algal blooms: “O the sea never had so much color!”

This episodic structure, as well as its repetition over hours, is central to the force of “Sun & Sea” — which looks at climate change nondirectionally, immersively, with the same casual unconcern as most holidaymakers (or, frankly, most legislators). Soloists often sing the same melody two times, once with banal lyrics about their day at the beach, and once tending toward the poetic, the cosmic, the climatic.

One perpetually irritated beachgoer (the mezzo-soprano Egle Paskeviciene) sings an aria about tourists who won’t clean up after their dogs; later, to the same octave-leaping melody, she marvels that last Christmas “it felt like it could be Easter!” A corporate workaholic (the tender bass Vytautas Pastarnokas, in maroon swim trunks) sings steadily on the beat with the score’s pulsing monotone — first about the difficulties of relaxing, and then, later, about the “suppressed negativity” that pours out “like lava, like lava, like lava, like lava.”

The whole cast sings an adagio Vacationers’ Chorus — “You should not leave your children unobserved!” — that’s reset, at the tail of the opera’s hourlong cycle, with Grainyte’s most poetic invocation of habitat change. “Eutrophication!” the beachgoers sing. “Our bodies are covered with a slippery green fleece; our swimsuits are filling up with algae.”

Then the first chorus repeats. Fun follows on fear, fear follows on fun, neither with any great impact on the other. The world heats up, and the singers slather on more sunscreen. The forests burn on the other coast, and we queue for brunch with smoke in our eyes. Barzdziukaite, Grainyte and Lapelyte are among the few artists ready to engage with climate change at this scale, with this seriousness: not as a single coming disaster, but an entire epoch in which pleasures and disasters will bump up against one another and the end never comes. 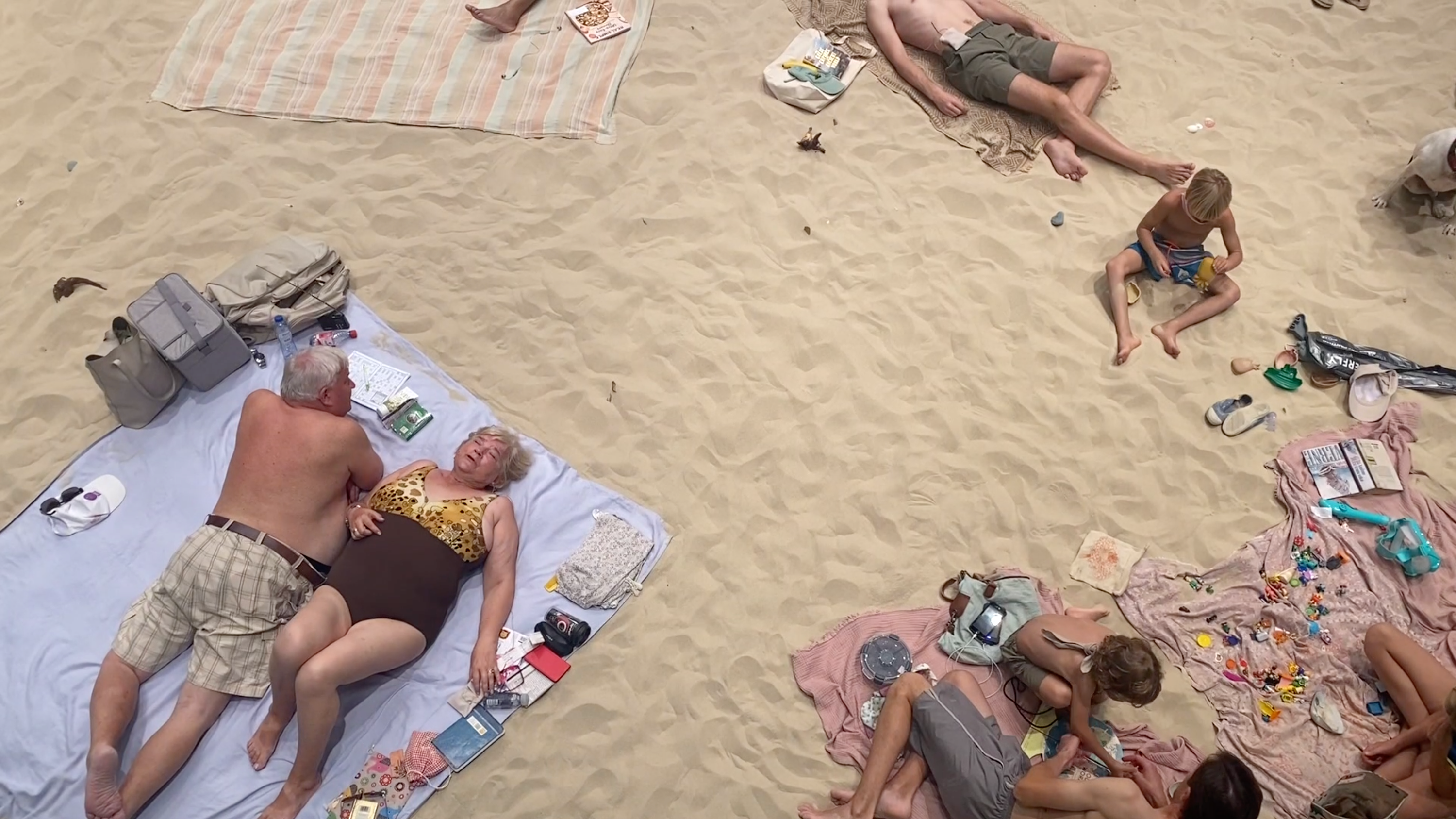 Grainyte’s lyrics still invoke “our northern flatland,” a Schengen area idyll reached by discount European air carriers, though the beach at BAM has been New Yorkified in places: nestled in the sand, alongside a Lithuanian word-search booklet, are bodega takeout trays and a tote bag from the Park Slope Food Co-op. Not that the translation to New York has been seamless. BAM Fisher is the wrong venue for “Sun & Sea,” with the singers and supernumeraries crammed on too small a sandbar, pinned up against ugly gray walls.

And the mezzanine is low, placing us too close to the singers and denying us the bird’s-eye — or drone’s-eye — view of the beachgoers so important to Barzdziukaite’s staging. “Sun & Sea” is choreographed to be seen overhead, from a forensic distance, as if we were sun gods looking down on our wayward creation. Yet that protective distance gets intentionally negated by new conditions of performance spectatorship: above all, by the phones wielded by the majority of spectators. (We might say that one working definition of performance art, as distinct from opera or theater, is that audience members are allowed to use their phones.)

By placing us over the singers, Barzdziukaite sets up the perfect shot; she is, after all, a film director, and has used the same perspective in documentaries about habitat decay. First in Venice, then in Rome, and now again here, I watched my fellow audience members cradle their phones in their hands throughout the performance, as if compelled by the aerial view. They held them parallel to the stage below, so that the screen filled entirely with sand.

By design, then, this episodic opera gets further chopped into shareable snippets, or else merely into pictures we can scroll through later, as if they were our own holiday snaps. Though it’s a bit diminished at BAM, this overwhelming achievement of “Sun & Sea” endures: It brings our ecological disquiet and our technological derangement into registration, turning the opera’s endless vacation into our own. We have become new people, with new eyes and ears, in a new climate, and we are still just lazing away the days.