Watching Raúl Esparza learn to walk the walk is as much fun as bingeing on runway struts from “RuPaul’s Drag Race.” Mr. Esparza is portraying the title thug in John Doyle’s limber revival of Bertolt Brecht’s abidingly stiff “The Resistible Rise of Arturo Ui,” which opened on Wednesday at Classic Stage Company.

At this point, the uncivilized Ui (rhymes with “phooey”) is still a low-grade Chicago hoodlum — and former housepainter — who has decided he needs to buy some poise if he’s going to take over the city. So he and his favorite henchman, Roma (Eddie Cooper), visit a Shakespearean actor (Elizabeth A. Davis) for lessons in the art of walking, sitting and speechmaking.

Ui is a fast study. Soon he’s stepping sprightly, hands cupped over his genitals as a center of gravity, and finding his powerful podium voice as he reads Mark Antony’s funeral oration from “Julius Caesar.” What a makeover. Mr. Esparza has morphed from schlub to spellbinder, the kind of guy who could command stadiums with a wave of an outstretched arm.

Mr. Doyle’s production of Brecht’s 1941 satire about the ascension of Adolf Hitler, written when the German playwright was in exile in Finland, is full of such enlivening moments of actorly glee. The eight ensemble members here are delightfully resourceful as they become an entire population of corrupt thugs and government officials, with little more than a change of headgear.

You could even imagine this version of “Arturo Ui” winning the flinty heart of its author, for its imaginative interpretation of the Brechtian dictates of style and sensibility. Mr. Doyle — a master of minimalist takes on big shows (including the Sondheim musicals “Sweeney Todd” and “Company” on Broadway) — has steered his cast into sharp, naturally unnatural performances. As Ui puts it, when questioned about his new artificial style, “No human being behaves natural these days.”

The production is also designed by Mr. Doyle to reflect visually Brecht’s working-class sympathies. With its use of chain-link fencing and old-fashioned work lights, the open set suggests an industrial environment, perhaps a construction site, and Ann Hould-Ward’s costumes include hard hats as well as fedoras. (Jane Cox and Tess James did the noirish lighting.)

As the performers move in and out of their various scenes, the effect is of a group of enterprising union members putting on a show against Fascism. Because every one of them is a pleasure to watch, let me list those I haven’t already mentioned: George Abud, Christopher Gurr, Omozé Idehenre (who deserves a special prize for versatility), Mahira Kakkar and Thom Sesma.

Yet all the cast’s resourcefulness isn’t enough to keep confusion and tedium at bay as this labored allegory unfolds in a painstaking parade of equivalencies. Though it was first staged in Stuttgart, West Germany, in 1958, Brecht wrote “Arturo Ui” with an American audience in mind. 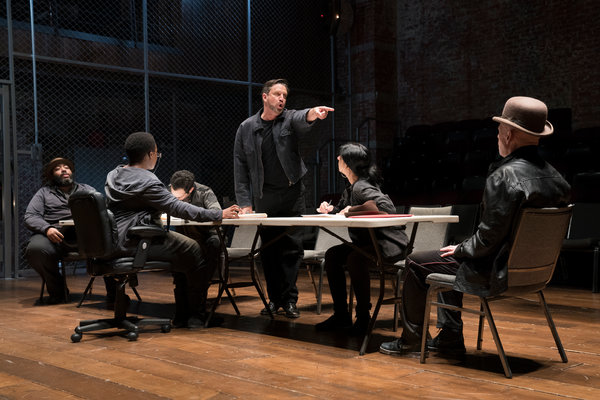 Each major phase of Hitler’s political career between 1929 and the late 1930s is rendered — in Elizabethan-style verse, translated by George Tabori — as a chapter in the story of how a Chicago mob, led by Ui, took over the cauliflower business. All the major characters are modeled on real people, including the beleaguered Weimar Republic president, Paul von Hindenburg, and such infamous Hitler henchmen as Göring, Goebbels and Röhm.

The Reichstag fire becomes a dockside warehouse destroyed by arson, while the Anschluss is translated into the annexation of the vegetable market of Cicero, Ill. And the legal labyrinth of the Eastern Aid Scandal, in which Hindenburg was implicated, is presented, in a long maze of trials and meetings, as the Dock Aid Scandal.

This means that “Arturo Ui” is, among other things, a partisan treatise on economics, as the rot within a failed capitalist order is revealed. While Brecht felt theater should always be didactic, he took his professorial duties very much to heart in “Arturo Ui,” and theatergoers without a solid knowledge in Hitler-era German history may often feel at sea.

That may be why American productions of the play have seldom been successful. (Its 1963 Broadway debut received yawning reviews and lasted for eight performances.) Yet Brecht’s portrait of a resistible rise of a tyrant has proved irresistible to directors in recent years, as a new spirit of nationalism spreads through the Western world.

Besides what actor worth his hambone wouldn’t want to have a chance to become a comic-book Hitler? The part has been embodied by the likes of Christopher Plummer (its Broadway originator), John Turturro (for the Classic Stage in 1991), Al Pacino (Off Broadway in 2002) and Lenny Henry (for London’s Donmar Warehouse last year).

Mr. Esparza, a performer of wit and fire, doesn’t fail to amuse in the role and — when his character roams the audience with the dead eyes of a shark — to chill. He’s especially entertaining when Arturo slips into faux-Shakespeare mode, evoking not only Richard III (the obvious parallel), but also Hamlet (for the early, surly Ui) and Macbeth (“Is this a luger I see before me?”).

Unlike most English-language productions of Brecht, this one makes sure that all the cast members stay on the same stylistic page. But few people are likely to leave “Arturo Ui” thinking how scary it is in its topicality.

Now’s the time to mention the elephant in the theater. I mean the specter of the current president of the United States, whose incendiary style we are meant to see in Ui’s underhanded politics and populist demagogy. Lest we miss the point, Matt Stine’s sound design segues at the end from crowds chanting “Sieg Heil!” to a few choruses of “Lock her up!” (The Donmar production was accented with “Make America Great” signs.)

But while Donald J. Trump is always on my mind these days, I didn’t see a whole lot of him on the stage here. What I was most conscious of was the hard-working ingenuity of a director and his creative team trying to elicit sparks from a cumbersome, ice-cold allegory.

The Resistible Rise of Arturo Ui