Review: The Return of Elliot Stabler 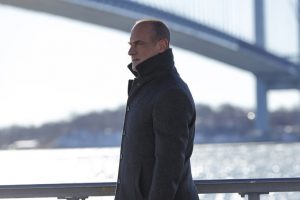 Thursday night’s premiere of “Law & Order: Organized Crime” on NBC — the first new “Law & Order” series since “True Crime” in 2017 — presented a number of questions. Here’s the answer to one of the more immediate ones:

“In the nation’s largest city, the vicious and violent members of the underworld are hunted by the detectives of the Organized Crime Control Bureau. These are their stories.” Cha-chung. It’s a little over the top — “vicious,” “violent,” “hunted” — but as obligatory “Law & Order” introductions go, it gets points for brevity. The echo of “In New York City,” from the opening of “Law & Order: Special Victims Unit,” the show that, in its 22nd season, has spun off “Organized Crime,” is a nice touch.

Another question was how Elliot Stabler, the detective with a famously dim view of suspects and their right not to be beaten in interrogation rooms, would be portrayed given the national reckoning with police violence that has taken place since we last saw him. When Christopher Meloni left “SVU” because of a contract dispute in 2011, Stabler, the character he had portrayed faultlessly over 12 seasons, had just racked up his sixth fatal shooting on the job. That’s not the kind of record that plays well for the hero of a mainstream, broadcast-network cop show in 2021.

NBC didn’t provide episodes in advance, so all we have to go on are the “Organized Crime” season premiere and Thursday’s episode of “SVU,” which served as a backdoor pilot, reintroducing Stabler and reuniting him with his former partner, Olivia Benson (Mariska Hargitay).

The episodes walked a middle line on the righteous-anger question. In the interrogation room, the more peaceable Benson had to restrain Stabler, as always. But he had the excuse that the suspect he wanted to throttle had probably planted a bomb that had critically injured Stabler’s wife, Kathy (Isabel Gillies). Later, when he was the target of a drive-by shooter, Stabler pulled his gun and took aim but didn’t take the shot.

The makers of “Organized Crime” — the showrunner and writer of the premiere is Ilene Chaiken, known for glossy melodramas like “The L Word” and “Empire” — made Stabler’s violent history central to the story, but it seems likely they’ll try to maintain the dodgy balance between crime-show adrenaline and Hollywood liberalism that has always characterized “SVU.”

“It wasn’t just testosterone,” Benson proclaims when a superior questions Stabler’s record. “It was because he cared. So much.”

There could be an opportunity, in Stabler’s resurrection, to delve seriously into the question of sanctioned violence, but don’t hold your breath. Moving Stabler off the streets and into the Organized Crime Control Bureau (a name shared with an actual New York Police Department bureau disbanded in 2016) moves the story toward boardrooms, computer hacking and European mobsters. Race is central to the initial story line, as it has to be in a current drama. But it’s awkwardly forced there, as the motivation for the hatred a sleek crook played by Dylan McDermott feels for his old-school, racist father, played by Chazz Palminteri.

Which brings us to the final question: Can Dick Wolf’s production machine use the “Law & Order” template to build a decent show around Meloni after all these years? Since the premiere of “Criminal Intent” 20 years ago, no new “L&O” show has lasted more than one season, and while “SVU” soldiers on, the focus of Wolf Entertainment has shifted to the more successful “Chicago” and “FBI” franchises.

Meloni was, for all intents and purposes, the last really good reason to watch a “Law & Order” show. (“SVU,” and Hargitay, haven’t been the same since he left.) He may not have the widest range or greatest nuance as an actor, but he has superb control, and in his tenure on “SVU,” his precise rendering of Stabler’s raging contradictions — his desire to be a good cop, his willingness to be a bad cop — was compelling and thoroughly entertaining. (Meloni used his meticulous approach to extreme behavior for hilarious effect in the Syfy comedy “Happy!”)

Perhaps the creators of “Organized Crime” will find a way to showcase Meloni on his own terms, rather than reducing Stabler to a standard international-procedural operative. One scene in the premiere, with Meloni and Palminteri facing off under the Verrazzano-Narrows Bridge, has some of the franchise’s old flavor. Meloni’s patented smile-stare — a singular mix of menace and smirk — is as effective as ever. And the action moved with a familiar “Law & Order” dispatch.

Much of the episode, however, felt generic, cursorily plotted and filled out with thin and unconvincing characters. (And those characters will stick around, since the show will have an eight-episode, single-arc season.) Stabler may be used to going it alone, but carrying “Organized Crime” could be his toughest case yet.