Review: Tom Stoppard’s ‘The Hard Problem’ Is a Mind-Body Gabfest

Just what is it that makes everybody fall in love with Hilary, the irresistible young academic at the center of Tom Stoppard’s “The Hard Problem,” the ontological gabfest that opened on Monday in a Lincoln Center Theater production?

Yes, she has the usual desirable traits of being smart and good-looking and friendly. But what really makes Hilary such a magnet is something more elusive, a quality that has normally hard-minded people giving her a coveted job she’s probably not qualified for and violating all sorts of professional ethics on her behalf. Not that Hilary encourages such behavior.

Because what gives Hilary that extra It factor is her desire to be Good — not as in good at work, or good in bed, but Good in its most capital-G, philosophically celebrated sense. A woman prone to antic behavior like praying in the middle of a one-night stand and putting a wastebasket over her head when she cries, Hilary is the Moral Pixie Dream Girl for an age of cynicism.

Played by a likable Adelaide Clemens in Jack O’Brien’s production at the Mitzi E. Newhouse Theater, Hilary arrives in New York with excellent timing. When this noble character first appeared in London in 2015, in the premiere of “The Hard Problem,” Mr. Stoppard’s first full-length play in nine years, the Western world felt like a slightly more hopeful place.

Since then, an epochal referendum in Britain and an American presidential election have divided the populations of the United Kingdom and the United States into seething partisan tribes. The idea that people are innately good — which is what Hilary hopes to prove — certainly has an enhanced quixotic luster. 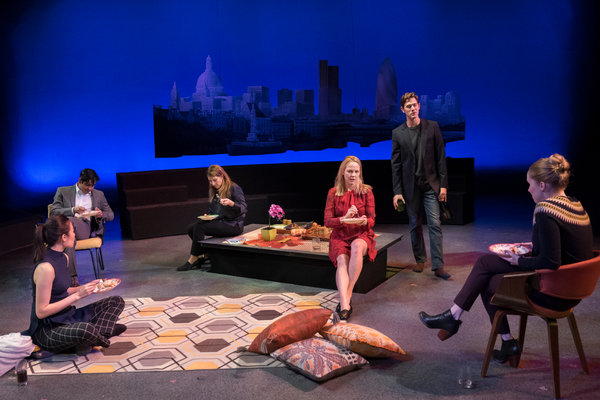 And who better to deal with the agony and ecstasy of such a quest than Mr. Stoppard? For more than half a century, this most vividly cerebral of dramatists has regularly found the passionate pulse in the pursuit of ideals in works like “Jumpers,” “Rock ‘n’ Roll” and his multipart “The Coast of Utopia” (dazzlingly staged by Mr. O’Brien at Lincoln Center in 2006 and 2007).

Yet as the characters in “The Hard Problem” argue and argue and argue — at work, at parties, during Pilates sessions, in bed — about the essence of human behavior, the stakes seldom feel compellingly high. Abstractly, this play may be taking on the biggest concepts imaginable, yet on stage it feels disappointingly small.

Mr. Stoppard, always a tireless self-editor, has tweaked and massaged “The Hard Problem” since I first saw it at the National Theater in London. And Mr. O’Brien’s staging feels lighter on its feet than Nicholas Hytner’s original version. Yet it is hard to avoid the impression that “The Hard Problem” — which often feels like the work of a precocious young neophyte rather than an old master — has yet to solve itself.

The problem of the title is that eternal conundrum, the mind-body dichotomy. Is what we think of as altruism only another example of Darwinian self-preservation? Is that most idealized of human bonds, mother love, not a matter of virtue but utility? That’s certainly the belief of Spike (Chris O’Shea), an aggressively bright young man who felicitously retitles a Raphael portrait of Madonna and child “Woman Maximizing Gene Survival.”

It seems that Hilary is always looking for forgiveness, not just for being human and fallible, but for having given up for adoption the baby she had at 15. Her search for answers takes her to the mighty Krohl Institute for Brain Science, a behavioral think tank founded by a hedge fund king, Jerry Krohl (Jon Tenney).

Against expectations, Hilary is offered a job there, beating out a brilliant fellow candidate, Amal (Eshan Bajpay). Under the supervision of her boss, Leo (Robert Petkoff), and assisted by the mathematically accomplished Bo (Karoline Xu), Hilary devises an experiment to demonstrate that children are by nature altruistic. But there are problems in the proving that will change the course of several lives.

It’s a story that in itself offers some ingenious arguments and counterarguments for the play’s central debate. But watching the show, all you’re really conscious of is the repetitive thrust and parry of formal arguments, dressed up with winningly Stoppardesque turns of phrase.

Mr. O’Brien tries to disarm potential objections by emphasizing the idea of theater itself as a problem-solving space. We begin with the young ensemble roaming David Rockwell’s airy, mutable set (lighted by Japhy Weideman) with hopeful smiles and what look like bound copies of the script, while blithe piano music percolates through the air.

The cast — which also includes Nina Grollman, Tara Summers and Katie Beth Hall (as a little girl who looks a lot like Hilary) — exudes an easygoing smoothness even when plowing through the stoniest fields of metaphysics. But moments that should induce shivers, including an easily predicted revelation described as both “a coincidence” and “a miracle,” tend to land with a plunk.

Being goodness incarnate is no easy task. Ms. Clemens, in a part that recalls the embattled and idealistic heroines of David Hare, lends Hilary an appealing humility spiked with just enough ego to keep her this side of unmodulated piety.

Still, Mr. Stoppard makes it difficult for us to feel the depths of Hilary’s pain, which is essential if this play is to have emotional impact. I kept thinking of the character of Eleanor, in Mr. Stoppard’s “Rock ‘n’ Roll,” a woman with cancer who refuses to be defined by her disease.

“I am not my body,” she roars at her husband, a Marxist materialist professor. “My body is nothing without me.” It’s an assertion far more moving — and convincing — than all the restless chatter of “The Hard Problem.”