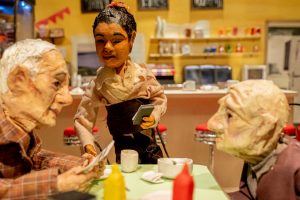 Tracy Letts, though always funny, has never been jolly.

You wouldn’t, after all, expect bonhomie from a writer whose earliest plays were called “Killer Joe” and “Bug.” Even now, in dark memory, those Off Broadway hits feel somehow infested, buzzing with sociopathy.

Nor did “August: Osage County,” his 2007 Broadway breakthrough, do much to advertise the charms of humanity, featuring as it did a hellish family that by the final curtain made the opening suicide seem inevitable.

Since then, despite the increased restraint of middle age, he has periodically released his swarms of psychic cicadas; “Linda Vista,” his 2019 Broadway outing, basically pinned American maleness to a museum wall, letting it writhe there, and us with it.

Now welcome to Letts 2021, the streaming edition, as Steppenwolf Theater Company, his longtime Chicago home, unveils a virtual Letts sampler. In three heartbreaking, brutally short plays — an anthology if not of horror then of angst — the fury may be fully internalized, but it is nevertheless poisonous, and seeps.

I at first thought the pandemic might be a factor in the tone of the triptych, which carries the omnibus title “Three Short Plays by Tracy Letts,” but as it happens all three were written in the Before Times. They first appeared, live, at the Gift Theater, another Chicago institution, during annual evenings of original short works by various writers. I can only imagine that on those occasions, they came off like the creepy guy at the corner of a party.

That’s a compliment, by the way, or at least a job description for Rainn Wilson. In “Night Safari,” first performed in January 2018, Wilson plays Gary, the sad sack leader of what may be the most pathetic animal tour ever. Certainly it’s the most unusual, containing only animals whose characteristics mirror those of their guide. Take, for instance, the Panamanian night monkey, monogamous in captivity but not, Gary emphasizes, in the wild.

“There’s a lesson there somewhere,” he says, “but you’re going to have to figure it out for yourself.”

Between stops at the aardwolf (“physically unattractive, and what is with this attitude?”); the boreal owl (“unsociable”); and the reverse-growing paradoxical frog (“Imagine that, if you can … dwindling as you mature”), Gary can’t help but display his own problems, too. These mostly involve Rhonda, who works in the gift shop and has so far responded unfavorably to his khaki plumage.

Wilson is terrific in the 12-minute monologue, managing (much as he did as Dwight Schrute on “The Office”) to make boorishness and hostility human if not sympathetic. In the director Patrick Zakem’s merciless close-ups, he looks as if he’s actively curdling. Even so, “Night Safari,” with its slightly over-clever conceit, is not much more than a lark — perhaps a foxy lark, characterized (I read) by its quick, high-pitched song.

“The Old Country,” written in 2015, is no less foxy; what seems at first like a simple lunchtime conversation between two codgers embodied by papier-mâché puppets moves quickly but without comment into another realm as you realize the men are talking at cross-purposes. Ted (voiced by William Petersen) is the spryer of the pair, and basically compos mentis; he praises the diner’s sandwiches, recalls the Russian waitresses who used to work there and waxes sexist on the topic of past conquests.

But Landy (the great Mike Nussbaum, who is 97) seems to have let go of his moorings, drifting on a sea of random and often inappropriate thoughts. When Ted says of a previous visit, “We sat in a booth right there,” Landy responds: “You sawed a lady in half.”

As his non sequiturs (or at least I hope they’re non sequiturs) get ever more so, you realize that he is not in fact responding; rather, he is making pronouncements, as perhaps we all do, from a locked-down world of his own.

That impression is deepened by the choice (the director, again, is Zakem) to stage the piece, written for humans, with the puppets, which as rendered by Grace Needlman seem to generalize human experience instead of specifying it the way live actors do. Their sad gorgeousness and apt materiality — Ted’s stringy white hair looks like Scotch tape, as if it alone were holding him together — give “The Old Country” the weight of universal tragedy, in just eight minutes.

Or perhaps I mean the lightness of universal tragedy. There’s no shrieking or bellowing in these plays; the theatrical format does all the dramatic work, and only by implication. The gap between what’s being said and what’s being shown is where the pain lies.

In that sense “Night Safari” and “The Old Country” are warm-ups for “The Stretch,” a 15-minute monologue, performed by Letts himself, that at first seems to be nothing more than a satire of the breakneck spiels delivered by racetrack announcers. You barely have time to laugh as the names of the horses flying by get weirder: Architect, Daddys Lil Dumplin, My Enormous Ego, Scrod.

Perhaps the most telling name is A Horse Called Man, which gives away the game. In the guise of “calling” the 108th running of the (fictional) El Dorado Stakes, “The Stretch” is actually calling the uncountable zillionth — and yet always roughly the same — running of a man’s life. I say “man” because it is from a man’s perspective that the story unfolds, at least as written; in the script, from 2015, the announcer’s monologue is “illustrated” onstage by human dioramas of a boy’s birth, then maturation, marriage, fatherhood, infidelity and decline.

But the version now streaming — directed by Anna D. Shapiro, who stepped down as Steppenwolf’s artistic director in August — does away with the illustrations, which strike me in any case as banal. Instead, Shapiro trusts the words (abetted by Allen Cordell’s thundering hooves soundscape) to score the play’s points in passing, and in Letts’s imperturbably dense performance they do. You don’t need to see a man getting married stage right to feel the punch of a line like “My Enormous Ego has stumbled badly and taken a terrific fall!”

Nor do you have to be a man, though Letts now seems to be our leading contender for bard of male moral decrepitude. He was always in the running, of course; check out the revival of “Bug” at Steppenwolf in November. For new Letts, there’s also “The Minutes,” scheduled to open on Broadway in April, two years after the pandemic shut it down in previews.

But now, taking on smaller slices of humankind, and leaving the big bad themes to speak for themselves, his vision seems funnier, deeper, bigger. Call him the paradoxical frog of playwriting: He’s growing as he shrinks.