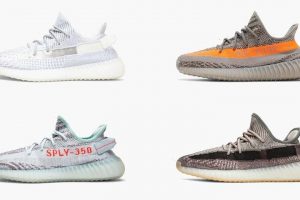 adidas pays homage to the first colorway of the YEEZY BOOST 350 V2 with the release of “Beluga Reflective.” The latest iteration of the model, inspired by the original 2016 release, serves as a nod to the iconic status that the silhouette has achieved in the few years since its debut. Officially arriving on December 18, the highly-anticipated YEEZY BOOST 350 V2 “Beluga Reflective” joins an expansive arsenal of adidas YEEZY collaborations.

To celebrate the release of “Beluga Reflective,” we curated a selection of notable YEEZY BOOST V2 sneakers, all available on GOAT. 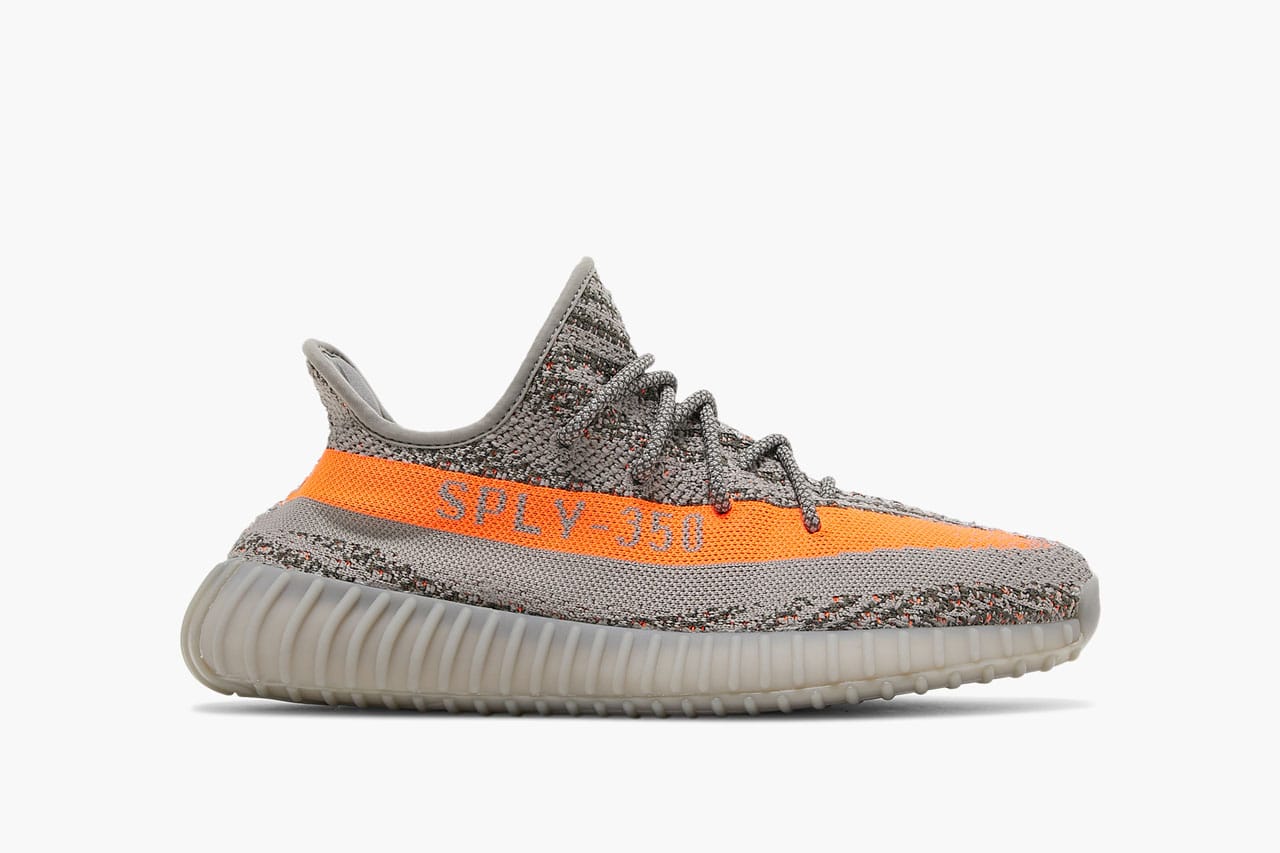 With a five year catalogue of YEEZY BOOST 350 V2 releases, “Beluga” has proven to be one of the most popular. “Beluga Reflective” stays true to the original 2016 colorway, but with the addition of reflective fibers sewn into the grey Primeknit upper. Aside from the subtle enhancement, the updated silhouette maintains the style DNA of its predecessor, including an orange side-stripe marked with SPLY-350 branding and full-length BOOST midsole that’s wrapped in a semi-translucent rubber cage. 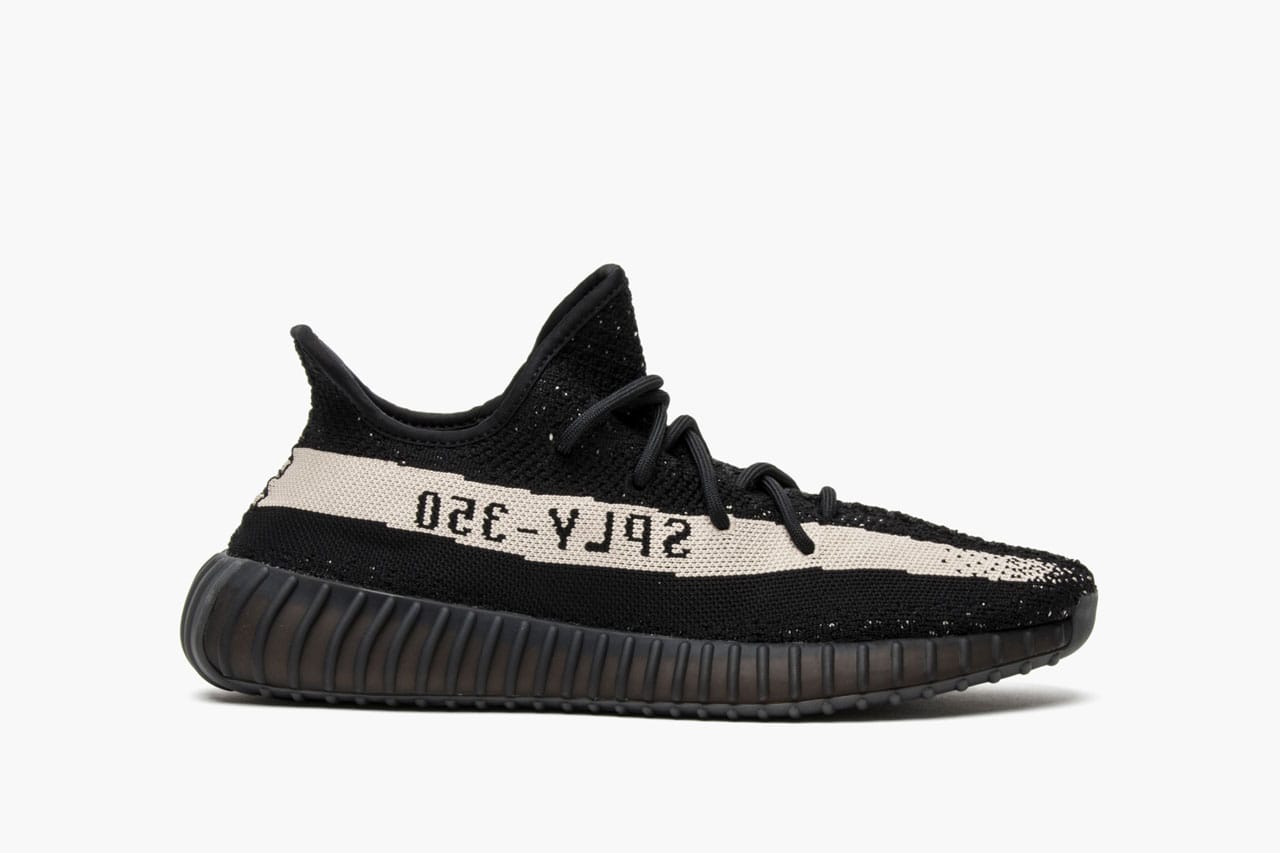 Released in 2016, the YEEZY BOOST 350 V2 “Oreo” introduced a monochromatic theme to the classic silhouette. Featuring an all-black Primeknit upper alongside a white side stripe marked with SPLY-350 branding, the versatile sneaker is aptly named. With a translucent black rubber cage that houses a full-length BOOST midsole, this iteration maintains a simple black-and-white color scheme. 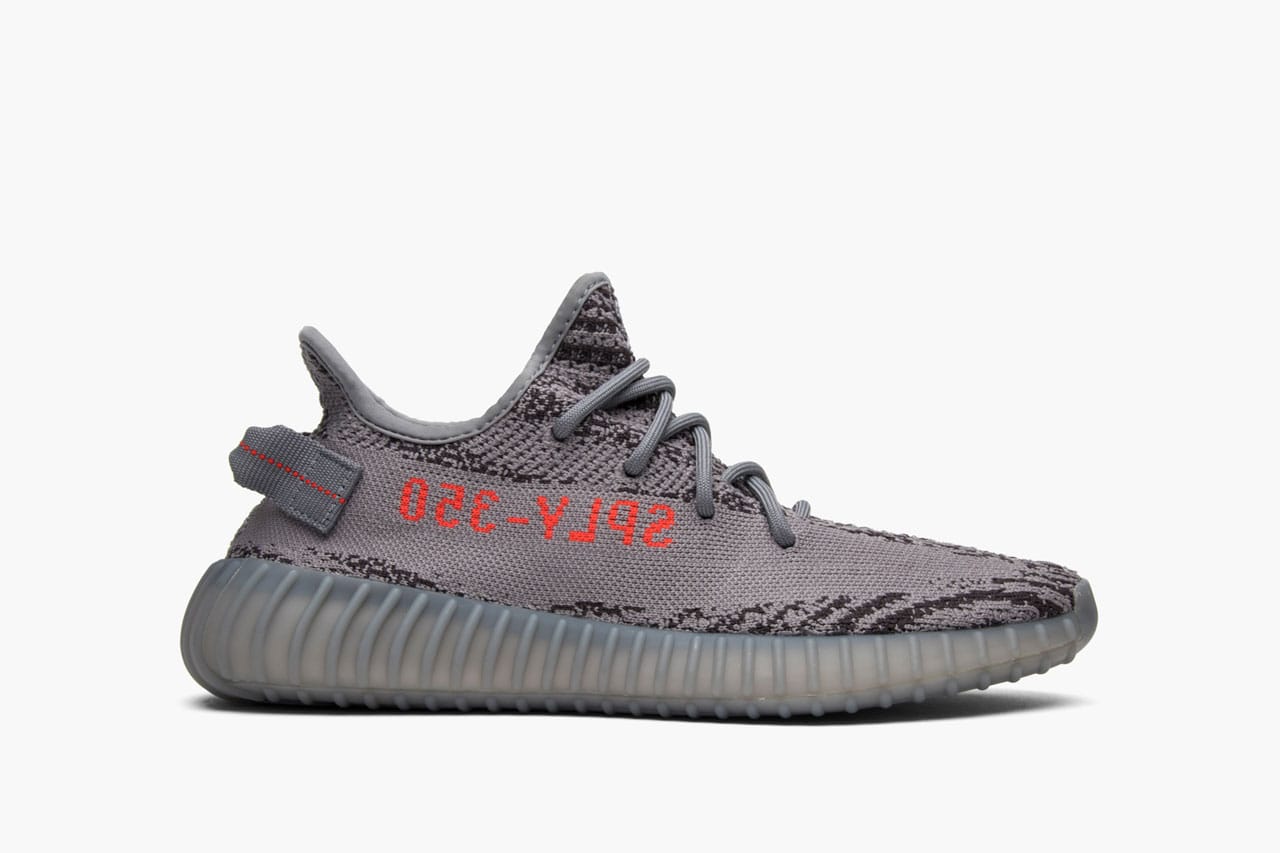 Selling out on its official release date in 2017, the YEEZY BOOST 350 V2 “Beluga 2.0” was quickly restocked five days later due to high demand. Compared to the first “Beluga” colorway, this updated iteration offers more subtlety with a muted grey side-stripe in place of the first colorway’s bright orange stripe. For an added remix, the orange SPLY-350 lettering appears in reverse and matches the stitching details found on the heel pull-tab. 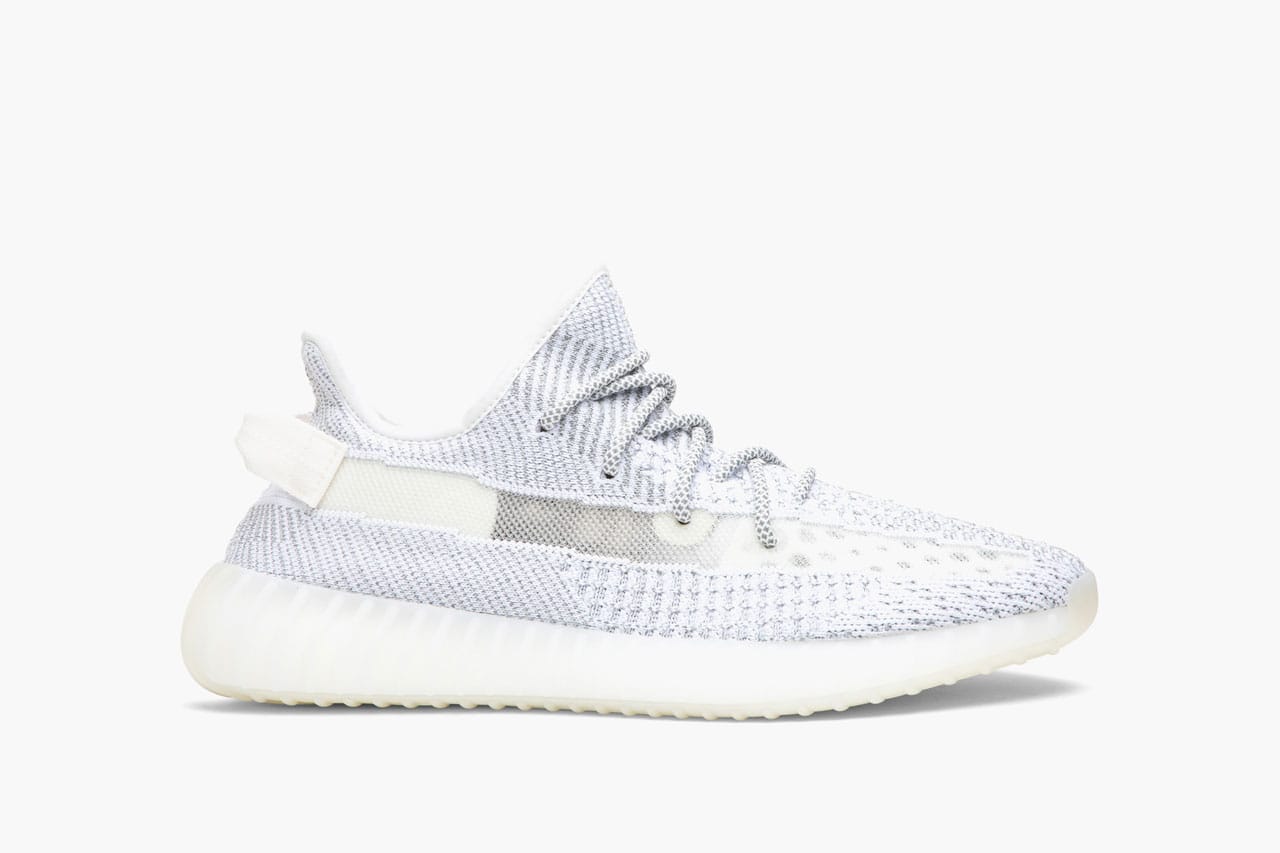 With the addition of reflective accents in the Primeknit yarns, the YEEZY BOOST 350 V2 “Static Reflective” takes the original “Static” colorway one step further. The differences end there as the 2018 sneaker maintains the same striking elements as its predecessor, including the translucent side-stripe, the 3M reflective detailing on the laces, the Primeknit upper and

Released ahead of Christmas 2017, the YEEZY BOOST 350 V2 “Blue Tint” embraces cool tones, marking a departure from the earthy colorways the brand often uses. The sneaker pairs a white and grey upper with reversed SPLY-350 lettering in red that matches the red stitching decorating the heel tab. The silhouette comes with blue-tinted accents on the collar and midsoles that are matched by the inner lining and rope laces. 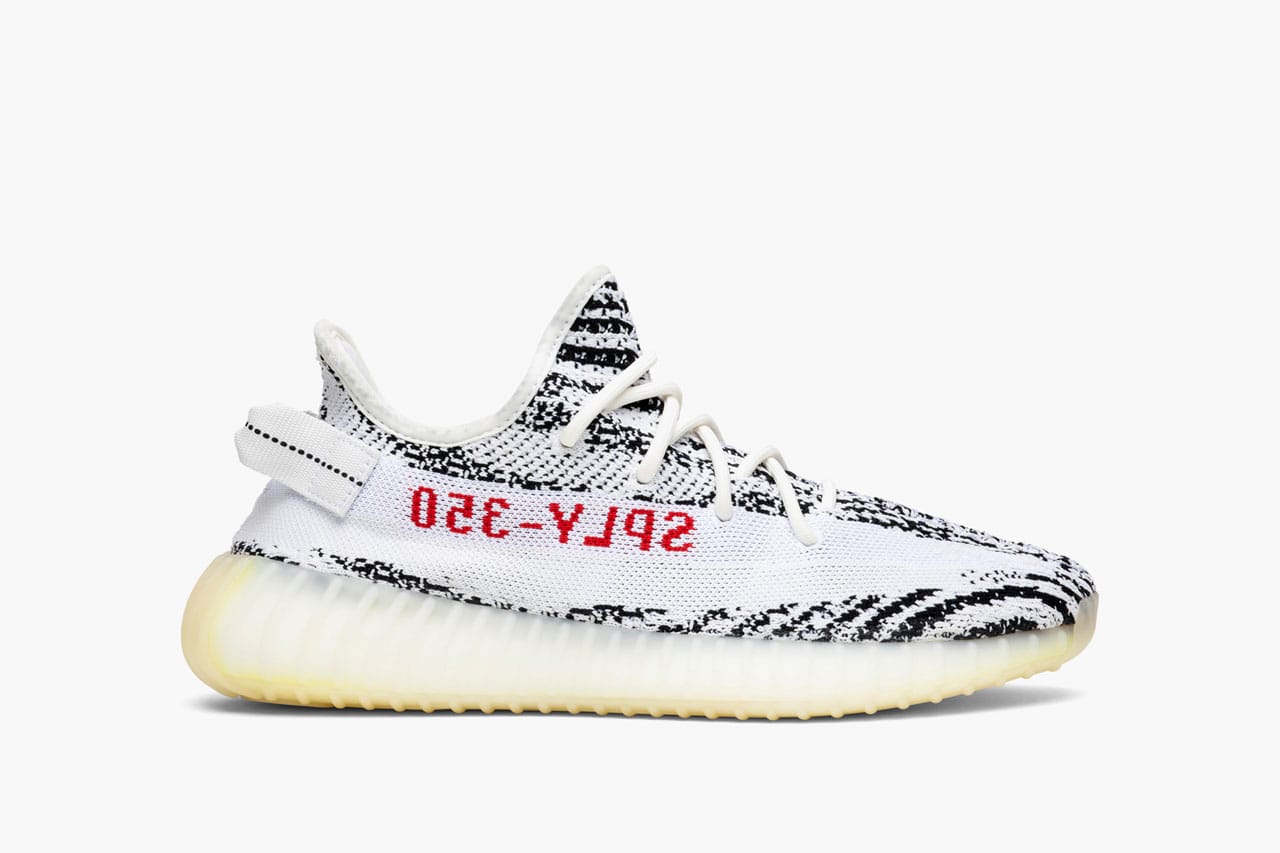 Keeping in step with the colorway’s moniker, West combines white and black notes throughout the Primeknit upper of the YEEZY BOOST 350 V2 “Zebra.” Splashes of red appear on the reversed SPLY-350 lettering and other details include a translucent white, full-length BOOST midsole. Since its initial release, the shoe has been restocked twice due to its popular nature and increasingly high-demand. 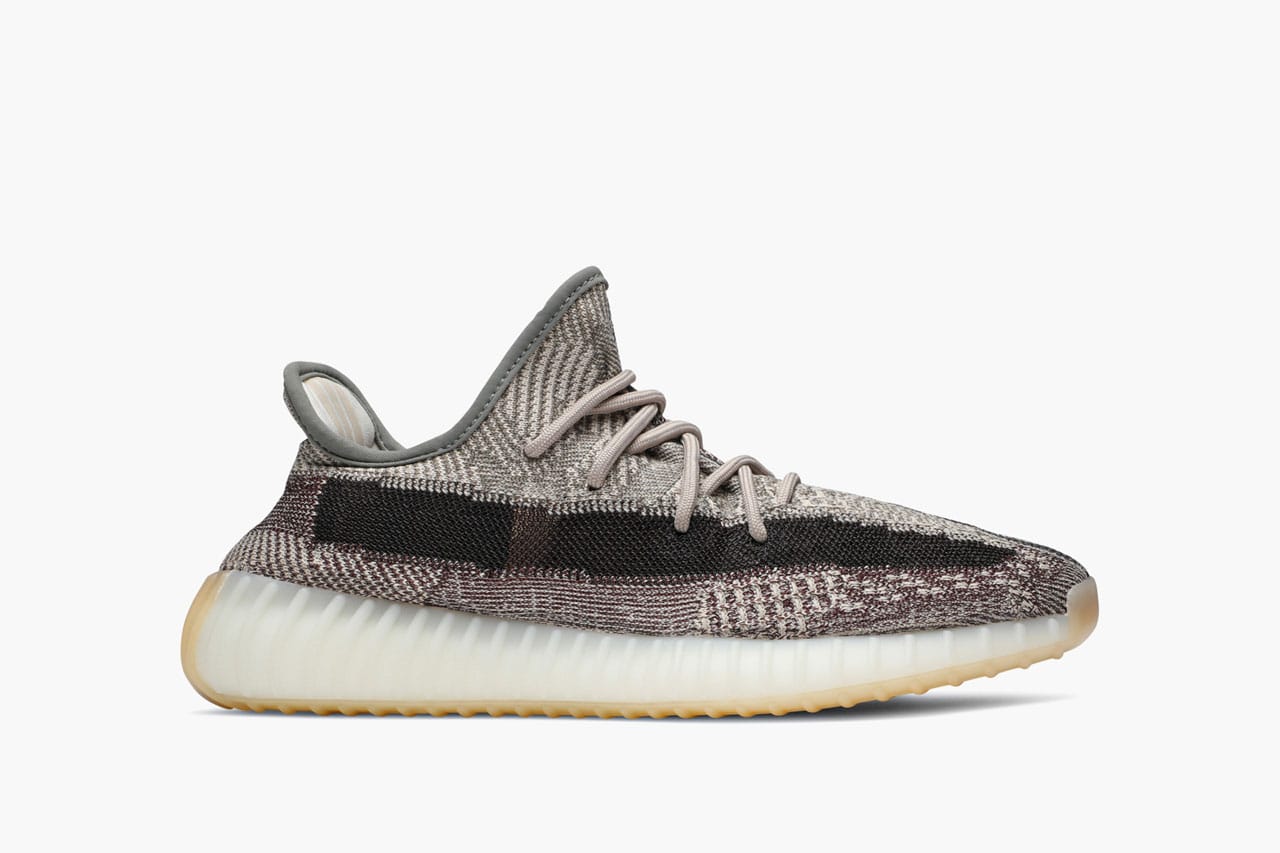 A blend of greys, tans and earthy browns decorate the Primeknit upper of the YEEZY BOOST 350 V2 “Zyon.” The signature monofilament lateral stripe cuts through the woven mix of colors in a dark-brown finish. Neutral grey hits appear at the collar, and underneath, a milky white midsole finishes the look. 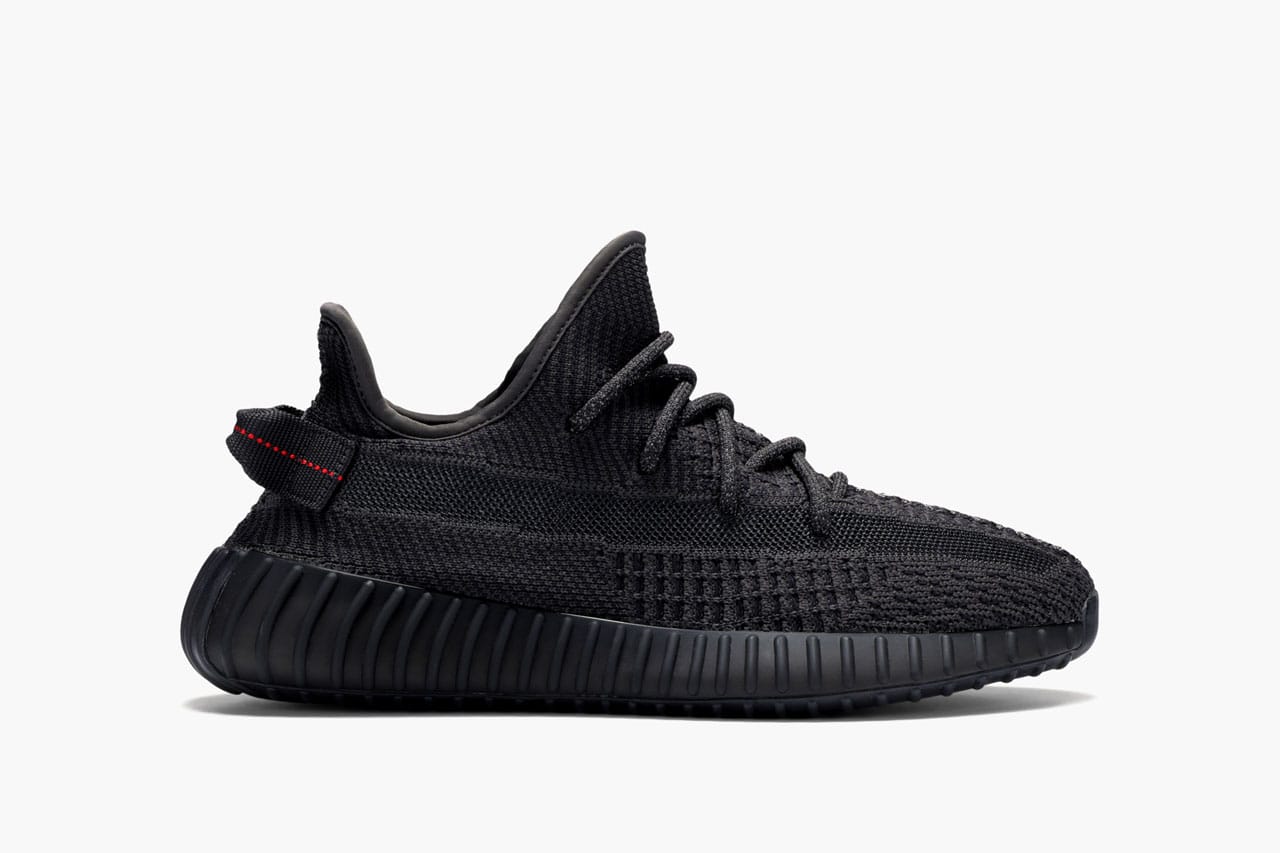 The YEEZY BOOST 350 V2 “Black Non-Reflective” joined the adidas YEEZY family in 2019. The only hits of color on the blacked-out sneaker appear on its heel pull tab, which features bright red stitching. A translucent side stripe is placed where the usual SPLY-350 branding would appear. The monochromatic look is enhanced by a translucent black BOOST midsole and integrated laces. 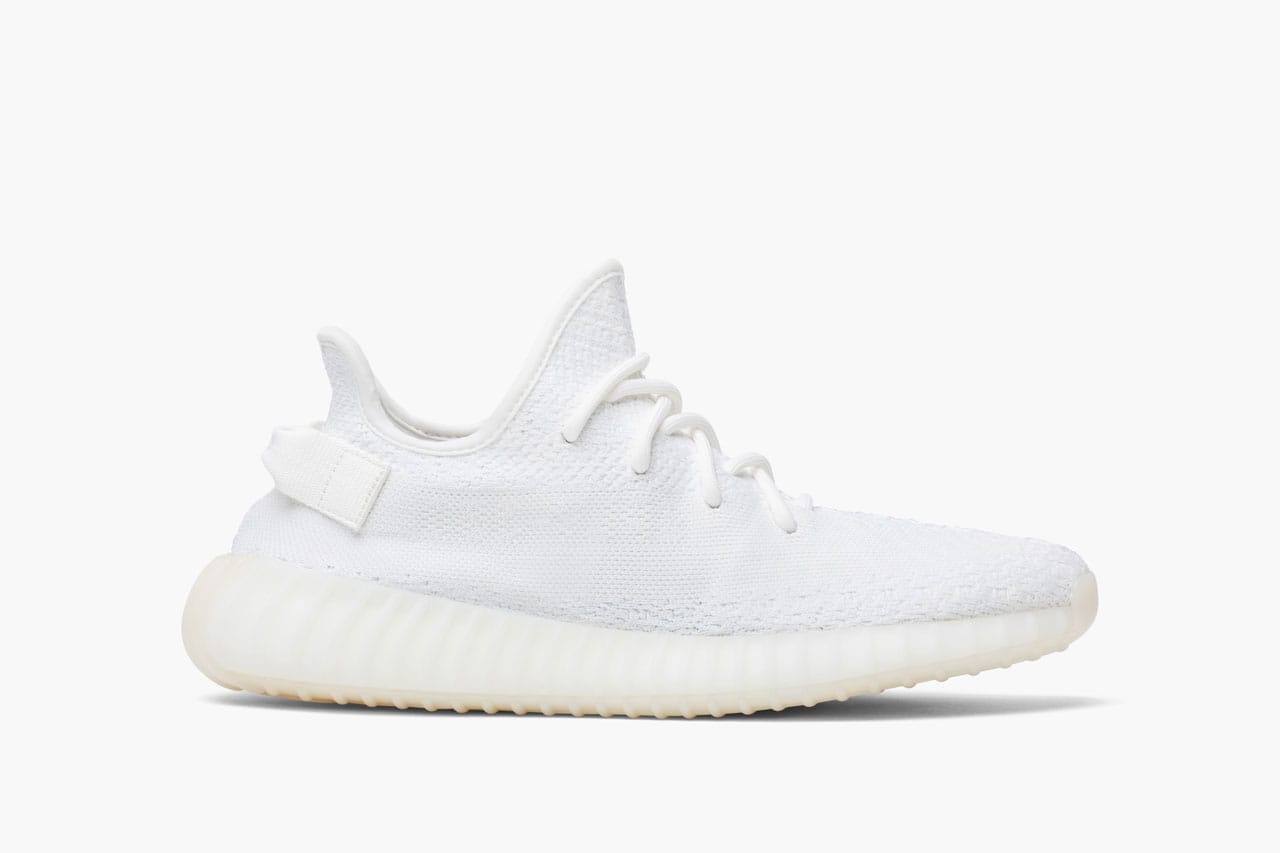 With its crisp monochromatic appearance, it’s no surprise the YEEZY BOOST 350 V2 “Cream White/Triple White” is one of the biggest drops in YEEZY history. Built around a cream Primeknit upper, the tonal SPLY-350 wordmark lends subtle branding while a translucent white midsole continues the theme. Released first in 2017 and again in 2018, the sneaker’s multiple drops echo West’s common promise of “YEEZY’s for everyone.” Final touches of a custom adidas and YEEZY co-branding mark the insole.
Source: Read Full Article