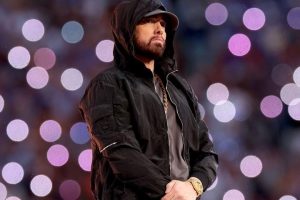 Speaking to Audacy, Harris explained that they were “thrilled” to have Em be inducted in his first year of eligibility. “For a lot of years people asked about hip-hop. He’s the 10th artist to be sort of categorized that way. But you listen to his music, it is as hard hitting and straight ahead as any metal song,” he said. “Like, it’s right there. It really is. It’s a chest punch with a message and with a power and with a rhythm and with a bang, so we’re thrilled he’s going in his first year of eligibility. It’s a big statement.”

The CEO added that the rapper is a good friend of the Rock Hall’s and has helped them in the past. “By the way, [Eminem] has come and helped us. He came and helped induct Run-DMC, and then he popped up on stage at the last year’s induction with LL Cool J when they brought the house down during his induction ceremony. Love that he’s paying a nod to his influences, and now he’s the one in the spotlight, and he influenced so many more.”

Elsewhere in music, Future’s “WAIT FOR U” debuts at No. 1 on the Hot 100 chart.
Source: Read Full Article