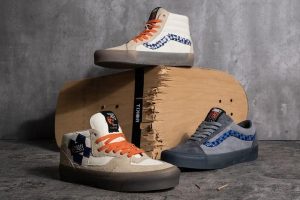 A major component of Vans‘ footwear strategy every year is to fully immerse itself in the world of collaborations. Lately, the skateboarding establishment has been driving up the numbers on this front by aligning with partners like WTAPS and Benjamin Edgar, and now it has just released a brand new joint capsule with Rokit.

The collection features the Vans Old Skool 36 DX WS, Sk8-Hi DX WS and the Half Cab 33 DX, all of which pay homage to Downtown Los Angeles — the home base of Rokit — to highlight its skateboarding and basketball cultures that have influenced its brand. “Inspired by a unique marriage of skateboarding and street basketball subcultures framed in a contemporary aesthetic, Rokit is an homage to champions born of pavement and blacktop”, says Bam Barcena, Creative Director of Rokit. “Although they seem to be two drastically different worlds, many who grew up in the skateboarding culture understand the diversity of individuals involved, the culture being a melting pot of backgrounds brought together by the love of the sport. With that in mind, it’s no surprise that those who step off a deck would then step onto the court, and vice versa.”

The standout element on each iteration is the jazz stripes as each is styled with checkered wraps that conceal hidden messaging that speak to DTLA’s neighborhood history and Rokit’s DNA. Additionally, the pairs are all fitted with co-branded hits and gray-tinted midsoles that feature oversized Rokit spell-outs.

The assemblage is available now via Bam Barcena’s online shop with each pair retailing for $85 USD.