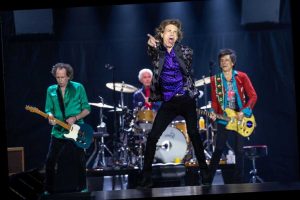 The Rolling Stones just dropped a surprise “new” song: a lost classic from nearly half a century ago.

The Stones recorded “Scarlet” with Jimmy Page of Led Zeppelin in 1974, but the track was never officially released. Stones guitarist Keith Richards said the collaboration happened when the band walked into the studio at the end of a Zeppelin recording session.

“They were just leaving and we were booked in next and I believe that Jimmy decided to stay,” Richards recalled in a news release.

Richards said the track wasn’t meant for an album.

“It was basically for a demo, a demonstration, you know, just to get the feel of it,” he said. “But it came out well, with a line up like that, you know, we better use it.”

Now, 46 years later, they finally did. The old tune is going to be a bonus track on next month’s rerelease of the 1973 album “Goats Head Soup,” which featured the hit song “Angie.”

But you can hear the whole track below: