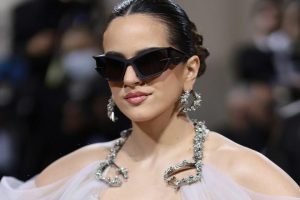 Rosalía on Wednesday shared the official video for “DELIRIO DE GRANDEZA,” off her newly-released album, MOTOMAMI.

The visual sees the singer-songwriter entirely immersed in nature, as she runs through fields with a dog, chops wood with a chainsaw, hunts with a bow and arrow and sets up camp with her own fire. The video, which was directed by Mitch Ryan, was filmed in Downsville, New York.

MOTOMAMI, which arrived in April, includes 16 tracks and features appearances from The Weeknd on “LA FAMA” and Tokischa on “LA COMBI VERSACE,” as well as collaborative efforts from Pharrell and Chad Hugo, James Blake, Frank Dukes and Cory Henry. The record marks her first solo full-length effort since 2018’s El Mar Querer.

In an interview with Zane Lowe on Apple Music 1, Rosalía said that this was the “hardest album” for her to create. “I’m very grateful to all the people that have been part of the album, but this album wouldn’t exist without the sacrifice and the dedication and the blood, sweat, tears, literally,” she said. “Being far from home for almost two years. Being far from the people I love for almost two years, because I never did that in my life and I don’t know if I could do it again because honestly, it was really tough.”

Rosalía, who previously performed “CHICKEN TERIYAKI” and “LA FAMA” on Saturday Night Live in March, is now gearing up for her world tour, which officially kicks off in Spain in July.