The teenager running alongside me, Luz, doesn’t say much. She is focused, her head dead straight, her stride landing rhythmically on the tarmac highway. Luz belongs to La Paz’s El Condor running club, which escapes the congestion of the city every Saturday for a training run up on the Bolivian high plateau, the altiplano. A small band of them have gathered for a recreational 10-mile run and kindly allowed me to join in.

I am assigned to the slowest group. My efforts at conversation had not gotten far. ¿Quantos años tienes? Fifteen, Luz tells me. ¿Donde vives? El Alto, above La Paz. A few minutes into our 10-mile run, her laconic answers are a boon, because speaking is the last thing I want to do right now. All I can really think to say is: Breathe. One single, repeated syllable: Breathe.

I had never run at altitude. Not real altitude. Hills, yes. Mountains, once or twice. But never, as now, at just shy of 4,000 meters, or nearly two-and-a-half miles high. My wheezing lungs and leaden legs remind me that I’m in foreign territory in every sense. The nearby snowcaps of the Cordillera Real ram the point home. My regular running route, along the flat, estuarine banks of Portugal’s River Douro, suddenly seems very far away.

After about three miles, the tightness of my breath and my fear of imminent collapse begin to recede. They have dissipated rather than disappeared. We are jogging at an even pace. “Enjoy yourself,” I try telling myself. And I do, as best I can.

I had been in Bolivia for five days. My hotel was in La Paz’s southern district, a full kilometer below Luz’s home in neighboring El Alto. The Casa Grande had a gym with a running machine, which I had used briefly each morning. New arrivals in La Paz, one of the highest cities in the world, often complain of feeling groggy and nauseated. Me, I felt fine.

This had encouraged me to hunt down a local running club. I always pack my kit when I go to a new city. Pounding the ground is, in my experience, a great way to get the feel of a place. Only running in La Paz presents unique challenges. Built on a steep-sided canyon high in the Andes, the city is all vertiginous roads and hairpin bends. Plus the sidewalks are a disaster. I spotted three runners the whole week.

My search had led me to El Condor. Comprising a couple of dozen adults and teenagers, the club is coached by Policarpio Calizaya, a three-time Olympian and one of the few top-flight runners in Bolivia’s history. In his mid-50s, he has a round and cheerful face. I meet him at Gate 9 of Hernando Siles stadium before one of El Condor’s regular weekday track sessions. Most of the club’s participants are female. He doesn’t know why. Men prefer football, he surmises: “Truth is, running is pretty fringe here in Bolivia.”

The status of running in his home country clearly grates at him. He contrasts the situation with neighboring Peru, which has produced a crop of elite runners in recent years. It’s all about government support, he tells me: “In Peru, they have it; here, we don’t.” To make ends meet, he has a small workshop where he makes sports apparel. His runners, most of whom come from low-income families, typically buy their running shorts and vests from one of El Alto’s sprawling markets. Their shoes are often secondhand.

Evo Morales, Bolivia’s charismatic indigenous president, has helped raise the profile of running in recent years. Since 2013, La Paz has hosted the Presidente Evo 10K race every July. Similar races occur annually in Bolivia’s eight other major cities. Even so, the winning pot is only around $2,000, says Policarpio. It’s not much for a top runner, especially once travel costs are factored in (no Bolivian runner receives sponsorship). His best runner, 22-year-old Yessy Apaza, gets by thanks to remittances from his mother, a domestic worker in Spain.

Curiosity had also led me to the door of Policarpio’s running club. In Vybarr Cregan-Reid’s excellent book on running, “Footnotes,” I had read about epigenetics and the physiological changes brought on by the thinner air found at altitude. The main effects are twofold, the British writer explains: Our bodies begin making more oxygen-carrying blood cells, and our muscles learn to use the limited oxygen more efficiently.

Processing more oxygen gives runners a competitive advantage, which is why the world’s best runners fit in time for high-altitude training. In his running days, Policarpio did the same, visiting this same stretch of highway just beyond El Alto. These days, he occasionally takes his best runners to train at Chacaltaya, which, at over 5,000 meters, used to be the highest ski resort in the world — until all the snow melted.

What I hadn’t realized is that it takes at least 10 days for any of these benefits to kick in. Similarly, it can be weeks before our bodies fully acclimatize to the negative effects of altitude. FIFA, the international soccer organization, advises visiting teams to arrive three weeks before a match in La Paz.

Back on the tarmac, we hit the eight-mile mark. An old woman stands on the roadside waiting for her bus. She is dressed in multiple petticoats and a bowler hat, the habitual attire for rural women of the altiplano. She looks at me quizzically. I try to say “hola” but can’t. My throat is too parched. Not to be outdone, my head is now also throbbing.

With the end in sight, Luz and her friends pick up speed. I attempt to keep up, but it is beyond me. Breathe, I say to myself. Enjoy yourself. Don’t die. As I’m talking to myself, the girls slowly and elegantly begin to stretch away, until soon, without a word, they are gone. 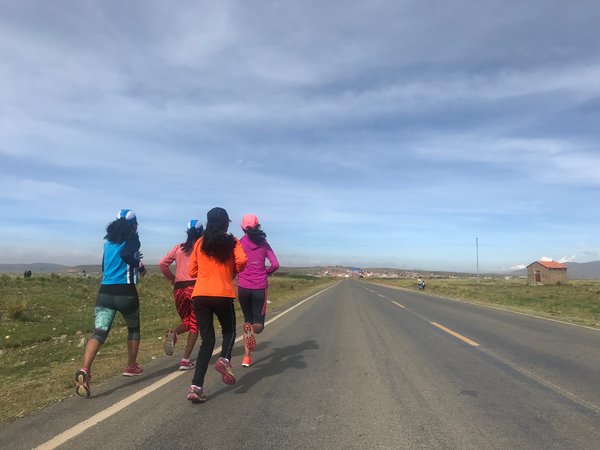 Oliver Balch is a British writer and journalist currently based in Porto, Portugal.