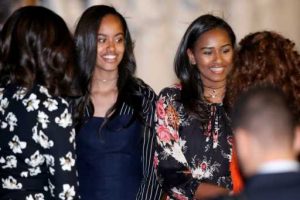 When Michelle Obama revealed that youngest daughter Sasha Obama, 20, had a serious boyfriend on national TV, people assumed it was just a young college romance. In reality, it looks like Clifton Powell Jr. is quite comfortable with the Obama family since he was seen spending time with older sister Malia Obama in Los Angeles this week.

Malia sported an ode to her home city, Chicago, with a gray White Sox t-shirt and baggy jeans while Powell kept it casual in a navy-blue tracksuit. (See the photos HERE.) They seemed pretty comfortable with each other — no awkwardness in sight — as they strolled through the park and eventually stopped so Malia could take a cigarette break. This makes us think that Sasha’s romance isn’t a new one since Malia and Powell acted like their outing happens often.

This sudden interest in the young women’s love lives is all thanks to mom dishing the details on Ellen DeGeneres last week. “Now they are bringing grown men home. Before it was just pop bands. Now they have boyfriends and real lives,” she gushed. While it was well known that Malia has been dating Rory Farquharson for quite some time, the identity of Sasha’s boyfriend was a quickly revealed after Michelle’s disclosure.

Malia and Sasha prefer to keep a low public profile, even though they have both relocated to Los Angeles, so we wonder if Michelle got a scolding about her revelation. This interest in the former First Daughters’ personal lives is only going to increase now that the paparazzi has names and faces to go on.