Megan Thee Stallion was the host and musical guest of an “S.N.L.” episode that satirized what may have been the committee’s final public meeting. 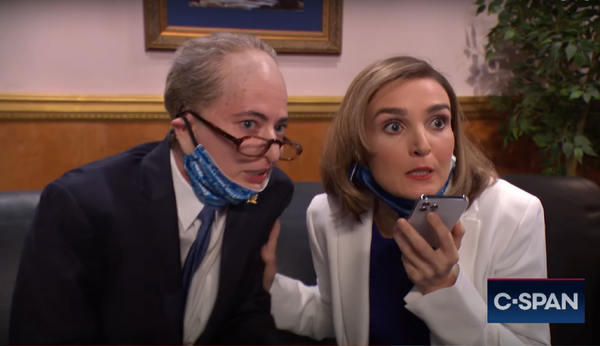 Although its first two episodes avoided opening sketches that recreated news events, “Saturday Night Live” eventually found reality too irresistible: This weekend’s broadcast led with a parody of what was potentially the final meeting of the House committee investigating the Jan. 6 attack on the Capitol.

As the hearing began, Kenan Thompson, playing the committee’s chairman, Representative Bennie Thompson, Democrat of Mississippi, offered some momentous remarks. “Jan. 6 was one of the most dramatic and consequential moments in our nation’s history,” he said. “So to fight back, we assembled a team of monotone nerds to do a PowerPoint.”

Summarizing the meeting’s agenda before holding up a tray of miniature cupcakes, he added, “We’re going to summarize our findings, hold a history-making vote, and then and only then, we all get to have a little treat.”

He then turned the hearing over to Heidi Gardner, playing Liz Cheney, Republican of Wyoming and the committee’s vice chairwoman. Gardner explained that the committee’s evidence was aimed at all Americans: “Whether you’re a Republican who’s not watching or a Democrat who’s nodding so hard your head is falling off, one person is responsible for this insurrection: Donald Trump,” she said. “And one person will suffer the consequences: me.”

For those viewers wondering where her toughness came from, Gardner suggested it was hereditary. She asked, “For your 10th birthday, did you eat pizza at Chuck E. Cheese with all your friends, or did you shoot a deer in the face with Dick Cheney?”