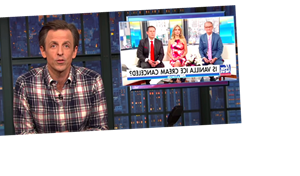 Seth Meyers nailed Fox News on Tuesday for one particular trend in its coverage.

“The smaller the story Fox News is focusing on, the bigger the story they’re ignoring is,” the “Late Night” host said.

Instead of discussing the coronavirus pandemic or Donald Trump’s second impeachment trial, the conservative network broadcast a story in primetime about the left attacking a journalist who revealed he’d accidentally been using dog shampoo for months. (The man, senior editor of online magazine Quillette Jonathan Kay, was roundly teased on Twitter over it).

“If you ever tune in to ‘Fox & Friends’ and they’re talking about, I don’t know, whether vanilla ice cream is going to be canceled for being too white, just know the story on CNN is probably ’Don Jr. eats Eric,‘” he added. “But that’s what the GOP is all about now. Inane culture war bullshit. There’s not time for insurrections or COVID when a poor man catches flak for complaining the font that said ‘for pets’ was too small to read while ignoring that there was a picture of a dog on the bottle.”

Watch his roast below: