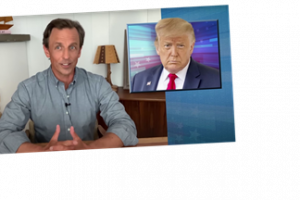 Is it possible, as wild as it seems, that the president isn’t the very stable genius he claims to be?

On his Monday night show, Seth Meyers dared to say so, chastising President Donald Trump for recently bragging that he “aced” a cognitive test while coronavirus cases surge throughout the country.

“The test you took is basically a placemat you give a child at a restaurant,” Meyers said, showing an image of the Montreal Cognitive Assessment (MoCA), which Trump took in 2018. The test includes tasks such as copying a cube and drawing a clock, HuffPost’s Sara Boboltz reported at the time.

“If you gave this to a 10-year-old at Chuck E. Cheese, they’d say, ‘Come on, man. At least give me a maze or a jumble. Challenge me.’ That’s like going to the optometrist and bragging that you saw the ‘E,’” Meyers said.

The “Late Night” host added that if Trump really wanted to show his intelligence, he could just reveal his SAT scores. Though, that seems unlikely. Meyers pointed out that the president previously had former attorney Michael Cohen threaten Trump’s alma maters to keep the president’s grades sealed. In addition, Mary Trump, the president’s niece, alleges in her new book that her uncle paid someone to take the SAT for him.

Despite that claim being disputed, Meyers concludes that there are no good options. Either the president paid someone to take the test for him, or his scores are so bad he doesn’t want anyone to see.

“There’s no, like, third option here where he kept his scores hidden because he was afraid people would know they were too good,” Meyers said. “Trump’s not some MIT janitor solving math problems and not telling anyone. If he was, the teacher would come in to find ‘FART’ scrawled on the blackboard.”