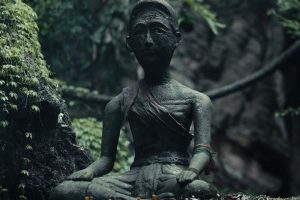 Shudder has unveiled a brand new trailer for the upcoming Thai-Korean horror film, The Medium.

Helmed by Shutter filmmaker Banjong Pisanthanakun and produced by The Wailing director Na Hong-jin, The Medium follows a documentary team to Northern Thailand as they capture Nim, a shaman, and Mink, her niece, who begins showing signs as the area’s next shaman. Over time, however, Mink’s bizarre behavior becomes more extreme and begins to hint at something more sinister.

Sawanee Utoomma stars as Nim, while Narilya Gulmongkolpech and Sirani Yankittikan take on the roles of Mink and Noi, the mother of Mink, respectively. The Medium was released in South Korea this past summer and is currently the sixth highest-grossing Korean film of 2021. It was also the winner for Best Film at Beyond Fest during the BFI London Film Festival.

Watch the full trailer above. The Medium is set to exclusively stream on Shudder on October 14 in the U.S., Canada, U.K., Ireland, Australia and New Zealand.

Elsewhere in entertainment, the giant animatronic doll from Squid Game has been brought to life in South Korea.
Source: Read Full Article