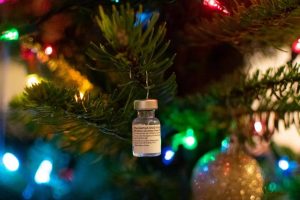 “Growing up, my Muslim family never celebrated Christmas,” tweets Mohammad Hussain. “This year I am not going home, because of the pandemic, so my roommates are teaching me how to have my first proper Christmas. Here are a few observations
“Christmas is a part-time job that you have from mid-November to the end of December. From the outside looking in, Christmas always seemed pretty simple. I always thought you put up a tree and then gave gifts to family. This is a lie. People have very strong feelings about their Christmas traditions. If someone is insisting that *certain food* is what you have to eat Christmas morning, because that’s their family tradition, DO NOT SUGGEST ALTERNATIVES. They will stab you in the neck.
“There are two streams of Christmas ornaments. The “fillers” and the “keepers”. The fillers are the generic ones. The keepers are meant to be more special and unique. This second stream is stored in your family’s reliquary to be one day passed on to the children.
“The religious aspect of Christmas is optional. I really like this one. If I was to suggest having a secular Ramadan to my mother she would have a heart attack. I will however be trying to get my family to do a Secret Santa for Eid. The name’s being workshopped. To wrap things up I want to applaud longtime Christmas celebrators. This is a lot of work and very tiring.”

1. Pandas get it on:
When the pandemic hit, Hong Kong’s Ocean Park zoo shut to visitors. Several weeks later, perhaps enjoying their new-found privacy, pandas Ying Ying and Le Le did something zookeepers had been trying to inspire for ten long years: they had sex. The mating doesn’t appear to have led to a pregnancy for Ling Ling, but getting it on after ten years of ignoring each other is encouraging to those in stale long-term relationships everywhere.
2. Enzyme eats plastic:
Plastic waste is choking the planet, but researchers at the University of Toulouse: have found a mutant bacterial enzyme that will happily chew through it all, breaking it down for easy recycling into new plastic materials. The enzyme was originally discovered in a compost heap of leaves, though it needed some tweaking to optimise its ability to break down plastic. The mutated version managed to degrade a tonne of waste plastic in ten hours.
3. Extreme kiwi philanthropy:
Dill and Jillian Jardine could have sold their 900 hectares along the shore of Lake Wakatipu to developers. After all, the region is popular among the remarkably wealthy, including PayPal founder Peter Thiel. Instead, the farming couple donated it to a local trust as a park for the enjoyment of everyone, not just billionaires. (Via Wired)

END_OF_DOCUMENT_TOKEN_TO_BE_REPLACED

END_OF_DOCUMENT_TOKEN_TO_BE_REPLACED
We and our partners use cookies on this site to improve our service, perform analytics, personalize advertising, measure advertising performance, and remember website preferences.Ok