Home » Entertainment » Sideswipe: July 26: Glory be to this heavenly pie!

Sideswipe: July 26: Glory be to this heavenly pie! 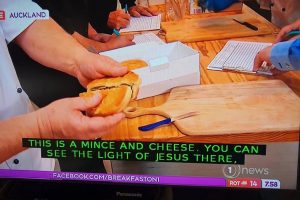 Sue, from Whangaparāoa, writes: “Watching TV1’s Breakfast, the segment about the National pie awards, and the reporter Ashleigh Yates had just announced that she was “in pie heaven this morning”. Needless to say, my mother (who mostly reads the subtitles as she is a little hard of hearing) was rather confused with the comment the man made on slicing open a mince and cheese pie. The subtitle was supposed to have read “You can see there’s a line of cheese there”, but it came out as “You can see the light of Jesus”. Oh my gosh, we have never laughed so much!”

What women wear at the Olympics

While one athlete was told by a judge that her briefs were too brief, a handball team were scolded because they’d upsized their bikini bottoms for larger shorts. It seems to be just the ladies, mind you. Welsh Paralympian Olivia Breen tweeted that after she completed a long jump at the English Championships, an official informed her her briefs were too skimpy. The 24-year-old, who has cerebral palsy, is filing a complaint. As a long jumper, she prefers to wear clothing as light as possible. “You have no right to say what I can and can’t wear,” she says of the female judge. Breen said her sprint briefs were the official Adidas version for 2021. The Norwegian women’s beach handball team were feeling uncomfortable competing in small bikini bottoms and decided to play in tight-fitting shorts that extended to their upper thighs. The European Handball Federation fined the team about $1800 for “improper clothing”. The International Handball Federation decrees that female players must wear bottoms “with a close fit and cut on an upward angle toward the top of the leg”, adding that the width of the sides “must be of a maximum of” 10cm.The Guardian, reporting on the regulations, said “the only thing you should worry about wearing is a medal”.

Many pubs being built in New Zealand

“I had a chuckle while reading a Labour Party publicity pamphlet put in my letterbox at the weekend,” a Mt Albert reader writes. “It says the Government has already built 7600 ‘public houses’. For all my 68 years in New Zealand, ‘public houses’ has been a posh way of referring to pubs.”