Sideswipe: November 18: The art of rice 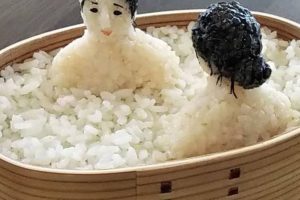 Onigiri are rice balls — a staple of Japanese cuisine. They are most commonly triangular shapes wrapped with nori (seaweed) to make them easier to handle. Instagram user Onigiri Gekijō creates “rice ball theatre”, creating lifelike scenes like this of two bathers.

1. An employer a woman once worked for installed these new electronic time clocks requiring every employee to punch in/out for work including lunch. She explains: “Punching in late or leaving early would cause your pay to be docked and getting a discipline letter. Multiple people wanted to sabotage the clocks (cut the cords, etc) but wiser heads prevailed … Everyone arrived several minutes early and left late, every single day, to avoid getting into trouble. Unfortunately, this created unimpeachable evidence of hours worked. The employer had to pay out thousands of dollars in overtime the first month. The clocks disappeared exactly five weeks after they were installed with no notification.”

2. “I used to work for a major beer distributor as a delivery driver. They decided to start using less glue in the packaging to save money. We’re talking a few cents per package. As a result, breakage during distribution increased drastically causing them to eat a lot more damaged product. It caused such a large loss in profit that they quickly changed course.”

3. “I was working as a medical assistant at a private practice medical clinic. Our clinic manager wouldn’t allow the new receptionist to drive to the bank to deposit cash. Made her walk carrying the money bag so that she couldn’t “drive away with the money”. Bizarre. I know. That went on for a few weeks. Then the receptionist was mugged and more than $1000 in cash was stolen. She was allowed to drive after that.”

During an interview with Stephen Hawking, the camera operator yanked a cable causing an alarm to go off. Hawking slumped forward. Worried they had killed him, everyone rushed over to find Hawking giggling at his own joke. The alarm was from an office computer losing power. There was also a rumour that Stephen Hawking would deliberately run over the toes of people he didn’t like. He denied this rumour by stating it was “A malicious rumour” and “I’ll run over anyone who repeats it”.