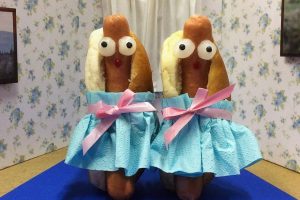 Spain’s Canary Islands is open for business despite the eruption of Cumbre Vieja volcano a few days ago. The first eruption in 50 years in the seismically active Spanish archipelago, sent lava hundreds of feet into the sky and spewing down the volcano’s face, destroying nearby houses and forests and forcing about 5000 people, including some 500 tourists, to flee. Spanish Tourism Minister Reyes Maroto, speaking to Canal Sur radio on Monday, suggested that the eruption is a potential tourist attraction. “The island is open,” she said. “If your hotel is affected, we will find you another one,” adding that if security is reinforced, tourists will be able to continue enjoying the island. “Make the most of this opportunity to enjoy what nature has brought us,” she insisted.

Today 115 years ago a meeting in Wellington, Marianne Tasker and supporters established a domestic workers’ union, hoping to use the Liberal Government’s Industrial Conciliation and Arbitration Act to force employers to improve pay and conditions. Central to their demands was a 68-hour working week. From the late 1880s to the 1930s, domestic service was the single largest form of paid employment for women. The “domestics” who worked in more than 15,000 New Zealand homes often endured harsh working conditions: a 16-hour day, 6½ days a week, for low wages. Several earlier attempts to form unions, including one led by Tasker in 1899, had petered out. The 1906 effort aroused much debate; the wife of Wellington’s mayor sniffed that domestic workers who complained about working conditions were “mainly those who were incompetent”. An administrative blunder soon gave its opponents an opportunity to nip the union in the bud. In mid-1907, Marianne Tasker left New Zealand to visit Britain. The acting secretary failed to re-register the union and the registrar of industrial unions cancelled its registration.

The 1970s must have been the time of scathing lecturer comments… “When training as an English teacher in 1976, as well as awarding me a low grade, my lecturer wrote: ‘This essay is like a holey jumper; it reveals more than it covers’.” Studying history at university in the 1970s, I too received a scathing comment on an essay. Handing in my work on Napoleon III, my lecturer wrote: “As Sarah Bernhardt said of marriage, ‘There must be more to it than this’.” I recovered, but never forgot it.