Home » Entertainment » Sixty Seconds with Michael McIntyre: 'As a performer I want to be loved' 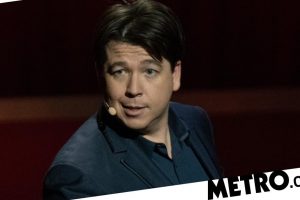 The comedian Michael McIntyre, 44, on farting spouses, terrible corporate gigs and his special for Netflix.

Congratulations on your Netflix special. Why did they take so long to ask you?

I’ve been doing the DVDs. Do you remember those?

Yeah, like discs that are now used as mirrors. So I had a deal with them and it took a while to extricate and move with the modern times and get involved with Netflix.

So it’s the biggest platform in the world, you got loads of money for it and an hour to play with. How does that feel, pressure-wise, to be funny?

Well, it’s the same as ever. The pressure to be funny comes from a person staring at you from the front row, and it’s always the person who’s not laughing.

The good thing about comedy is that you can’t really argue with a laugh.

And I love the Palladium, where we filmed it – amazingly it was on March 6 and it was the last gig we ever did so I was thrilled we got it done. And now I can watch it.

After 10 record-breaking nights at The O2, the Palladium must feel like your back bedroom?

Yes. I’m in my bedroom now and it’s actually bigger, my bedroom.

But actually, a laugh sounds so much better in the Palladium – they’re all on top of you and enjoying it more because they’re closer to you and not watching it on a screen.

But if I’d done it at a bigger venue I’d have made a bit more money, which I now need because I don’t work any more [laughs].

This is a bit edgier. There are some F words in there…

I’m not a big fan of swearing. I always swore a little bit but it’s annoying to some people. But it’s part of life and there’s no better word…

I remember an old joke I did about the spices you don’t use in the cupboard and there was a jar of spices I was impersonating and he said, ‘I’ve still got the plastic bit on my head. Why the f* did they buy me?’ And you have to say ‘why the f*…?’

Besides, we’re all grown-ups.

Do you ever look out into the audience and see everyone cracking up and you’re telling a story about a spice rack and think, ‘How did that happen?’?

Oh, always. But the flipside of that is when I’m telling jokes at a corporate event or something and people don’t laugh because they’re distracted or drunk or not into me.

Do the people in your life not mind being the butt of your jokes?

So far, so good. I mean, my wife has been the main butt of them and she is of the opinion that if it’s funny, it’s funny.

I did a joke about her, which was awful, about the things she does when she’s asleep.

It culminated in her farting like a firework display and it’s not even true – but she had to deal with that.

And of course people come up to us and go, ‘Oh, is this the poor, long-suffering wife who can’t pull her tights up and farts?’ and I’m like, ‘Yeah!’

Some of the Netflix show is edgy. The thing about being attractive to Asian women… in this day and age it’s tricky to go anywhere near race. Don’t people jump on you?

Only in an Asian nightclub! But this is what comedy is. I went to Hong Kong and girls seemed to like me but it’s really not about them as much as it is about this loser I portray myself to be that no one finds attractive, finding somewhere where they do.

There’s no politics and really nothing edgy, either. It’s all pure silliness.

I’ve played to 800,000 people across the world and if they weren’t all laughing heartily I wouldn’t be doing it.

Not a single person has been upset by anything I’ve said or I would drop it.

Don’t you get to a level where you don’t care any more?

Not really because as a performer I want to be loved. And that’s why I would never want to upset anybody. I don’t understand comedy that might offend someone.

Do you feel like part of the establishment now?

[Laughing] No, I’m not part of any establishment, it’s about whether you make someone laugh and if a younger guy comes along and is funnier than you, then you have to raise your game.

You have a Saturday night show called The Wheel…

I can’t disclose the format but I can tell you there are celebrities and experts in a field and they are on this enormous spinning wheel with a contestant in the middle and there’s a lot of fun in it.

END_OF_DOCUMENT_TOKEN_TO_BE_REPLACED

END_OF_DOCUMENT_TOKEN_TO_BE_REPLACED
We and our partners use cookies on this site to improve our service, perform analytics, personalize advertising, measure advertising performance, and remember website preferences.Ok