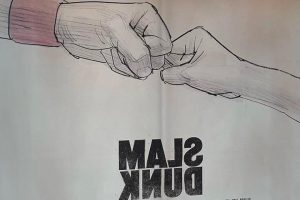 Following the announcement of the new Slam Dunk anime movie debut in Fall 2022, the publisher took it to Twitter to release a new visual teasing the animated film.

From the image, we can see that one player fist-bumping another person. The presence of a wristband may reveal that the character at the right is Kiminobu Kogure, except the color is not the Shohoku vice-captain’s usual white color. Highlighting the poster is the catchphrase that reads “Just, I don’t want to lose.”

Slam Dunk original debuted in Shueisha‘s Weekly Shōnen Jump back in 1990 with a six-year serialization run. The manga series sold over 120 million volumes in Japan, while the beloved anime series from 1993 to 1996 led to four animated feature films.

Look for the Slam Dunk film to be released sometime in fall 2022.