Home » Entertainment » So you liked The Thief, His Wife And The Canoe? You’ll love these 5 shows and podcasts on the case

So you liked The Thief, His Wife And The Canoe? You’ll love these 5 shows and podcasts on the case 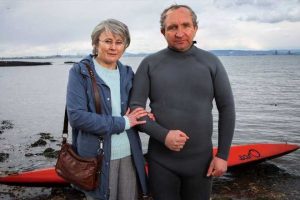 If you watched ITV’s The Thief, His Wife And The Canoe and don’t know what to do with yourself now, have no fear, for there’s a small army of podcasts and TV shows about John Darwin just waiting for you.

When a good TV show grips you, it’s hard to come down from the high that tuning in each night can bring you. For many of us, our nights have been preoccupied with getting stuck in to – and quickly becoming downright confused by – ITV’s The Thief, His Wife And The Canoe.

The recent ITV drama explored the bizarre case of John and Anne Darwin, who fooled the world into thinking John had died at sea (in his canoe) in order to claim insurance money to pay for his outstanding debts.

The real-life 2002 case gripped the nation, not least because of how tragic the initial reporting of it all was. What soon transpired, though, was a tale of lies, deception and familial rage that was only uncovered with the help of a (now well-known) 2006 photo of the cheery couple in a Panama real estate office.

Monica Dolan stars as Anne Darwin in ITV’s The Thief, His Wife And The Canoe.

The Thief, His Wife And The Canoe has done a grand job of exploring the case but has provided viewers with an intriguing insight into the whole bizarre ordeal from Anne’s perspective. While viewers have been positively gushing over the four-part series so far, it does reach its end tonight (20 April). If you’ve enjoyed exploring all the crevices of this particular case then your enjoyment needn’t end with the ITV series.

Scroll on for other podcasts and shows you can get stuck into that all explore the Darwin case from different – but equally intriguing – angles.

The Thief, His Wife And The Canoe: The Real Story

The story behind the ITV drama is explored in the upcoming accompanying documentary.

This new one-off special film digs deeper into the case of John and Anne Darwin and acts as an accompaniment to the ITV drama.

It features exclusive interviews with the police officers who investigated the disappearance as well as the insurance investigator and the prison colleague who grew suspicious about the case. The journalists who tracked Anne down to her new home in Central America also feature, along with the police sergeant on duty when the apparently confused Darwin appeared one afternoon at a West End police station.

The Thief, His Wife And The Canoe: The Real Story airs on Thursday 21 April at 9pm on ITV.

British Scandal is one of our favourite podcasts and it never fails to amaze us with some of the wild cases it covers. Well, plug your headphones in and get lost in the canoe con from a new angle. What led John to make such a drastic decision to fake his own death? The 45-minute long episode is easy to listen to and will definitely fill the true crime shaped hole left by the ITV drama.

Back From The Dead: The John Darwin Story

We love a documentary and we love one even more when it’s free and ready to watch on YouTube. Some of the most intriguing true crime cases are the focus of some truly great YouTube documentaries and Back From The Dead is no different. In this 45-minute long show, we’re treated to interview footage, testimonies and some truly eye-opening revelations about the true state of John and Anne’s financials.

True crime podcasts are some of our favourites so you bet there’s a plethora of them focused on this truly wild case. The Swindled podcast already does excellent deep-dives into some of the most well-known cases of white-collar criminals, con artists and the like. So of course John Darwin fits into this podcast episode perfectly.

Canoe Man is available to watch on BBC iPlayer.

Before the ITV drama, BBC had already lapped up the story of the Darwin’s and provided us with a dramatic adaptation. The one-off film is available to watch on iPlayer and is part drama, part documentary but focuses, most interestingly, on the three versions of the story that Anne told to try and fool the press, the police and her family.

Canoe Man is available to watch on BBC iPlayer now.